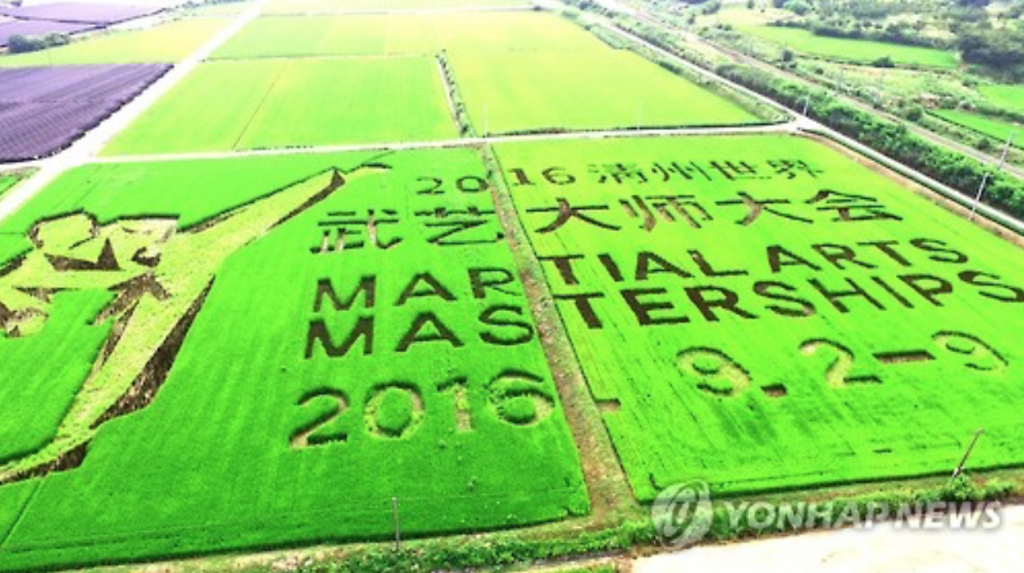 Some 16,000 square meters of farmland in Cheongju is turned into a signboard for a martial arts festival on Aug. 17, 2016. (image: Yonhap)

CHEONGJU, South Korea, Aug. 17 (Korea Bizwire) – An international martial arts competition will kick off in central South Korea early next month, bringing together some 2,000 fighters and officials from across the world, organizers said Wednesday.

The inaugural World Martial Arts Masterships (http://www.2016martial-arts.kr) will be staged from Sept. 2-8 in the city of Cheongju, some 130 kilometers south of Seoul, in North Chungcheong Province with a total of 173 gold medals up for grabs.

Dubbed the “Martial Arts Olympics,” the event aims to attract more than 2,000 competitors and coaches from all over the world and offer programs in 17 non-Western martial arts, including taekwondo, wushu, judo, kendo, muaythai and kickboxing.

As of Saturday, 1,993 athletes and officials from 87 countries have signed up for the event, with a total of 1,454 matches to be held, according to the organizers.

The event’s torch will be lighted at a hillside castle in the city on the eve of the competition before staying for a night at the city hall and being moved to the main gymnasium. North Chungcheong Province Gov. and chief organizer Lee Si-jong will received the torch from seven female participants and hand it over to the first bearer.

On the opening day, the World Martial Arts Masterships Committee (WMC) will be established to help manage the competition systemically and build the legitimacy of the event by cooperating with international organizations.

The 30-member WMC will also closely work with the International Centre of Martial Arts for Youth Development and Engagement (ICM), an institute under the United Nations Educational, Scientific and Cultural Organization (UNESCO), in running the competition and naming future host countries. The ICM is based in Cheongju.

The organizers are planning to host the second edition of WoMAM in 2018 or 2019, and are mulling a plan to switch the event to odd years starting in 2021 and holding it overseas from the third edition. Chungju, another North Chungcheong Province city some 60 km north of Cheongju, will likely be the host of the second WoMAM, they added.

Chungju, the birthplace of the World Martial Arts Union (WoMAU) which has 60 martial arts organizations under its umbrella from 40 countries, was originally considered for the host city this year. However, it turned down the offer due to budget problems.

In mid-July, the organizers signed a cooperation agreement with the Korean Olympic Committee (KOC), the national Olympic body, for a successful event and claimed this will be the first step to getting recognized by the IOC. The organizers said they want to see athletes who compete at the Olympics and the Asian Games entering their event in the future.