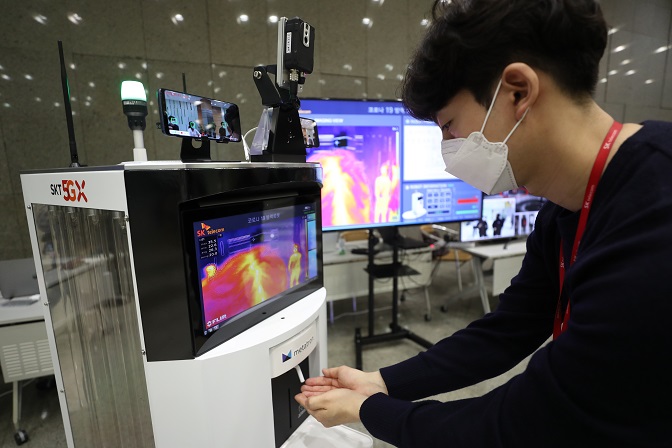 This file photo, taken May 26, 2020, at SK Telecom Co.’s office in central Seoul, shows the company’s robot equipped with IoT sensors to prevent the spread of the novel coronavirus.

As of the end of last year, the number of mobile connections to such devices stood at 10.05 million, up around 2 million from the previous year, according to data from the Ministry of Science and ICT.

IoT devices range from connected vehicles to home appliances that exchange data with other devices over the internet, and they can provide remote control services.

The country’s total IoT subscriptions are set to grow further this year as the government encourages wider use of IoT devices.

The ICT ministry plans to invest 12.6 billion won (US$11.4 million) this year for projects to strengthen the wider ecosystem of IoT services and products.

The country’s major mobile carriers have also set out to boost IoT subscriptions based on their 5G networks.

SK Telecom Co., the country’s largest wireless carrier, has restructured its mobile business to place IoT services as one of its nine core business divisions.