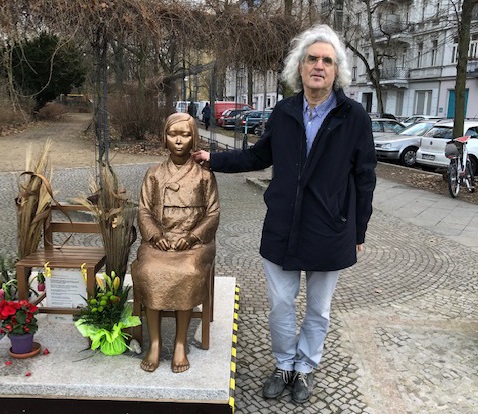 Professor Alon Harel of the Hebrew University of Jerusalem poses for a photo next to a Berlin statue symbolizing Korean victims of Tokyo’s wartime sexual slavery in this photo provided by him on March 1, 2021. (Yonhap)

SEOUL, March 2 (Korea Bizwire) — An Israeli law professor, noted for his effort to rectify a Harvard professor’s disputed paper on the 1923 massacre of Koreans in Japan, has said that he visited a statue symbolizing Korean victims of Tokyo’s wartime sexual slavery earlier this week.

In an email to Yonhap News Agency, Alon Harel of the Hebrew University of Jerusalem attached a photo of himself posing next to the statue in Berlin on Sunday — in what appears to be a show of his sympathy toward the victims of Japan’s wartime atrocity.

“I discovered today that there is a memorial for the Korean women in Berlin. Here I am near the memorial,” he wrote.

Harel is a co-editor of the Cambridge Handbook of Privatization — expected to be published in August. The collection came into the spotlight as it is to include the disputed paper by J. Mark Ramseyer of Harvard Law School.

In the paper already published online, Ramseyer, citing rumors, depicted Koreans at the time of the post-earthquake chaos around Tokyo in 1923 as marauding “gangs” that “torched buildings, planted bombs, poisoned water supplies” and murdered and raped people.

Harel has told Yonhap that following critical comments by him and others, Ramseyer will “significantly” revise the paper and that it will not appear in its original form in the handbook.

Ramseyer has already been at the center of international criticism with another paper that depicted the former sex slaves as prostitutes under voluntary contracts without providing concrete evidence.

In a separate email interview last month, Harel refused to comment on Ramseyer’s paper on the comfort women, a euphemism for the sex slaves, but said he is aware of the prevailing claims that Japan’s efforts to atone for the atrocity are not sufficient.

“I was not aware that there is historical debate concerning the fact that the so-called comfort women were sex slaves brutally abused by the Japanese,” he said.

“I know that Japan admitted it and paid compensation at some point although I am aware that the prominent claim is that the compensation and the apologies in the 1960s were not sufficient,” he added.