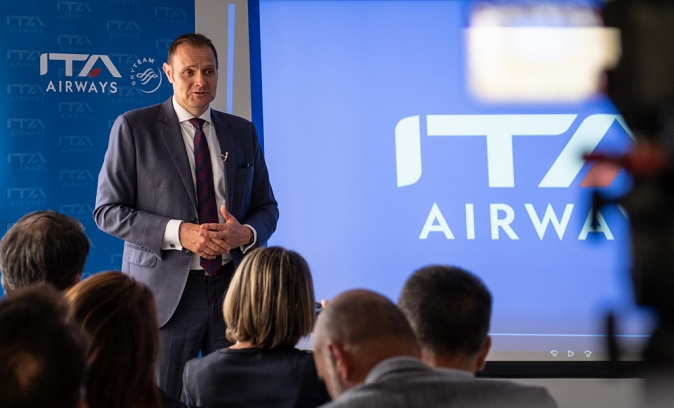 Andrew Bunn, Country Manager UK, Ireland and Nordics at ITA Airways, speaks at a press event at the Italian Chamber Of Commerce and Industry ahead of their participation at the Business Travel Show Europe on Tuesday, June 28, 2022, in London. Bunn was announced as the new Country Manager for the UK.

ROME, June 29 (Korea Bizwire) — ITA Airways will participate in the Business Travel Show Europe on the 29th and 30th of June. The event will take place in the ExCel exhibition centre in London, United Kingdom, and will be the occasion for the Italian flagship carrier to affirm its position in the British market by exposing together with the biggest travel companies in Europe.

During the show, ITA Airways will be present in the Airline Pavilion with a branded area and activities. For the occasion Pierfrancesco Carino, Vice President International Sales ITA Airways, will introduce to business partners and local media the new UK country manager Andrew Bunn.

One of the main themes of ITA Airways’ attendance will be the company’s commitment to sustainability. In fact, ITA Airways’ goal is to become one of the greenest European airlines by 2025 with 75% of the fleet featuring new generation aircraft. It has already started with the new Airbus A350. These aircrafts are 70% lighter thanks to a new range of materials, and the fuel consumption and CO2 emissions are reduced by 25%.

The Business Travel Show Europe was founded more than 28 years ago and has always represented an important occasion to give visibility to the European continent’s most important travel companies and agencies. The organisation anticipates bringing together up to 14,000 corporate travel, travel meetings and travel technology professionals to the event, in addition to more than 3,000 pre-scheduled hosted buyers appointments with exhibitors.

The multiple offers of the Rome Fiumicino and Milan Linate hubs will allow ITA Airways to be the reference carrier from the UK to Italy and via Rome or Linate to Europe and the Mediterranean for the UK customers, the Italian community, and the main communities of the Mediterranean countries.

From the airport of London City, the domestic destinations that can be reached in Italy are Alghero, Brindisi Bari, Cagliari, Catania, Naples, Palermo, Reggio Calabria, Lamezia Terme, Pescara and Olbia.

In the 2022 summer season, ITA Airways launched 62 new destinations, of which 22 are domestic, 34 are international and 6 are intercontinental, including New York from Rome Fiumicino/Milano Malpensa, and Miami, Boston, Los Angeles, Sao Paolo, and Buenos Aires from Rome Fiumicino. Thanks to codeshare agreements with the major international carriers, ITA Airways is continuing to grow its network via partnerships with other global carriers – giving a privileged access route to the markets of greatest interest for the Company.

Codeshare agreements enable ITA Airways to reach the entire domestic network of other international carriers with direct flights from Rome Fiumicino and Milan Linate to their hubs. In all, 27 codeshare agreements have been signed so far, for a total of over 360 destinations served on which ITA Airways will use its own codes.

All ITA Airways flights can be purchased on the ita-airways.com website, from the ITA Airways Call Center, or from travel agencies and airport ticket offices.

A photo accompanying this announcement is available at https://www.globenewswire.com/NewsRoom/AttachmentNg/f55157e1-c8bf-45b3-87cf-0b8d9d54d8c6