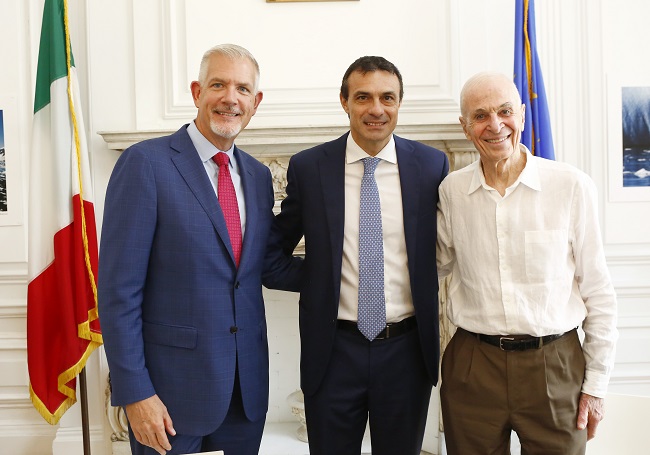 Pictured from left to right, Gerald Kunde, Senior Vice President Government & Institutional Affairs for Ferrero, Italian Consul Fabrizio Di Michele, and George Hirsch, Chairman of the Board of NY Roadrunners (NYRR), at a press conference announcing this year’s Italy Run on Friday, July 15, 2022, in New York City. For the first time since 2019, the Italy Run by Ferrero 4M, a celebration of Italian heritage, will host more than 5,000 runners of all ages in Central Park.

NEW YORK, July 15 (Korea Bizwire) — On Saturday morning in Central Park you will breathe a bit of Italy, with the third edition of the ‘Italy Run’, the 4-mile (6.5 km) marathon organized by the Consulate General of Italy with the contribution of the New York Road Runners (NYRR) and Ferrero North America. With 6 thousand participants who registered in just three weeks, the race is “sold out”, explains Consul General Fabrizio Di Michele, who after the three-year stop imposed by the pandemic wanted to celebrate the return to normality with a new edition of the race. “After three years of incredibly difficult challenges, fear and grief, the is something we needed to heal the wounds of Covid,” the consul said at the presentation press conference at the Park Avenue consulate, to which took part also the chairman and CEO of LaPresse, Marco Maria Durante.

What Di Michele already announces as a “fantastic success” for the number of entries, would not have been possible without the “commitment and support” of the New York Road Runners, one of the leading US running organizations, inventors of the New York Marathon. “For me the Italy Run is a special event, don’t tell it around, but this is my favorite race in Central Park”, jokes George Hirsch, president of NYRR and legendary figure of US running.
The race that will unfold along Central Park was born from “an incredible idea” – says Hirsch – “it is a great act of friendship between Italy, America and the city of New York”.

Another fundamental partner for the Italy Run is Ferrero, which with its products will delight the participants and the public in the post-race festival set up in Central Park. “It was difficult to restart a race like this” after the stop due to Covid, but “we are lucky to be partners in the race”, says Gerard Kunde, senior vice president for institutional relations at Ferrero North America, who is promises a real treat on Saturday with the ‘Crepe Station’ based on Nutella, set up in the Park. Testimonial of the race, which will start at 8 from the East Side of Central Park, will be the iceskater Francesca Lollobrigida, silver and bronze medalist for Italy at the Beijing 2022 Winter Games, who will take part in the race.

A photo accompanying this announcement is available at https://www.globenewswire.com/NewsRoom/AttachmentNg/fe491f9f-02c7-4f07-9124-be22b8a161d1