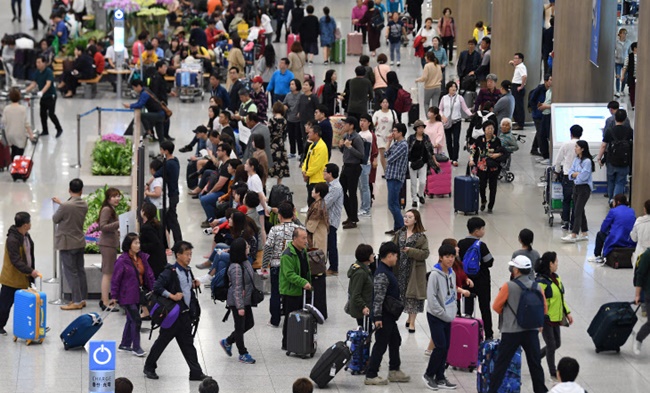 The Ministry of Justice said a total of 773,000 Japanese nationals entered South Korea between last November and January this year, marking year-on-year growth of 32.9 percent.

Chinese arrivals increased 28.5 percent to 1.27 million in the same period, the ministry said, noting Chinese accounted for 33 percent of all foreign visitors during the three months.

According to the ministry, 81.7 percent of foreign visitors said tourism was the purpose of their entry into South Korea, up by 21.9 percentage points from a year earlier.

“Most Japanese visitors are tourists. The number of Japanese arrivals has not changed much despite diplomatic conflict between the two countries,” a ministry official said.

Likewise, a growing number of South Korean tourists are visiting Japan these days.

According to Japanese government data, the number of foreign visitors to Japan rose 7.5 percent on-year to an all-time high of 2.69 million in January this year. South Koreans accounted for 779,400 of them, the data showed.