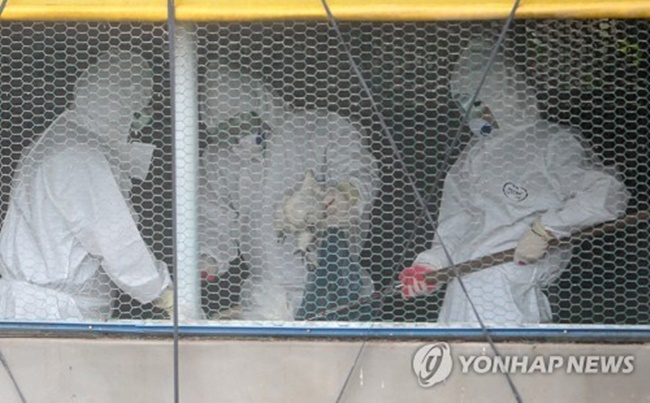 Quarantine officials gather chickens at a farm in Jeju Island on June 7, 2017, in order to cull them to prevent the spread of bird flu. (Image: Yonhap)

JEJU, June 7 (Korea Bizwire) – The provincial government of Jeju Island said Wednesday it has decided to cull more than 124,000 chickens in the coming days to prevent the spread of avian influenza, which hit the southern resort island late last week.

The provincial government has culled about 9,000 chickens since Friday, meaning about 133,000 chickens or about 8 percent of the total 1,672,000 chickens being raised on the island will be killed off.

The Ministry of Agriculture, Food and Rural Affairs said Monday that the outbreak — the first in two months — was caused by a highly pathogenic strain of H5N8.

Highly pathogenic avian influenza refers to viruses that spread quickly and result in a high death rate for birds.

South Korea slaughtered more than 30 million poultry to contain the worst outbreak of bird flu that hit the country in November.

The Jeju Island government said the 124,581 poultry to be culled belong to 21 farms within the 3 kilometer radius of three farms in Jocheon-eup, Aewol-eup and Nohyeong-dong in Jeju City where the bird flu cases were reported.

Most of the poultry to be slaughtered are chickens, a city government official said, adding among them are 263 geese, turkeys, ostriches and other types of birds being raised at schools and farms.