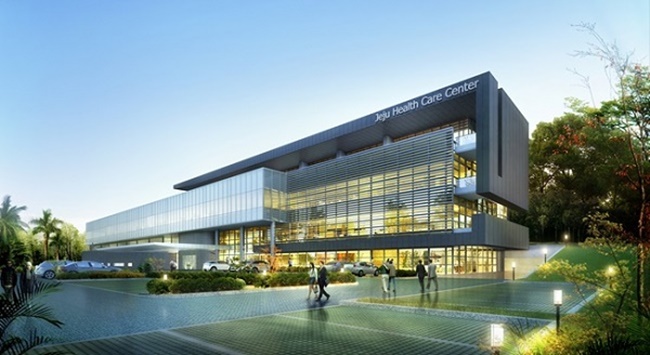 The Shanghai-based Greenland Group recently requested the extension of the March 4 deadline for the opening of the Greenland International Medical Center on the southern resort island.

Jeju rejected the request, saying it will appoint a neutral professional to listen to the explanation from the Chinese group before making the final decision on whether to revoke the medical business license of the Greenland medical center.

The Greenland medical center received conditional approval from the Jeju government as South Korea’s first for-profit hospital on Dec. 5 last year, putting an end to 16 years of controversy over the introduction of investor-owned medical institutions.

The approval was granted on the condition that the hospital treat only foreign patients. But the Greenland Group has strongly protested the ban on South Korean patients, contending that it is illegal for the government of Jeju to ban it from treating domestic patients.

Amid the conflict, the Chinese medical center has shown scant signs of taking opening procedures, though it is obliged by South Korea’s medical law to start medical services before March 4.

“Following the conditional approval, sufficient preparation time was given for three months. But the Greenland medical center has failed to begin operations by the deadline. In accordance with the current medical law, the government will take hearing procedures to cancel the permit,” said Ahn Dong-woo, Jeju’s vice governor for political affairs.

The Jeju government will select a neutral professional from among lawyers, public accountants and former civil servants to be in charge of the public hearing procedures on the matter.

The hearing procedure will begin Tuesday and take about a month, provincial officials said.

The Chinese group filed an administrative lawsuit in mid-February to have the controversial condition of its operation revoked. In the lawsuit filed with the Jeju District Court, the group insisted that it is unlawful to limit the scope of patients eligible for treatment at the Greenland medical center only to foreigners.

The medical group sent a written request to the Jeju government last Tuesday, demanding the March 4 deadline be extended.

The hospital had hired 134 medical workers, including nine doctors, 28 nurses, 10 nursing assistants and 18 international coordinators, as of August 2017, when it applied for the approval from the provincial government.

As the opening was delayed by more than one year, all of the nine doctors in charge of the plastic surgery, dermatology, internal medicine and family medicine departments quit.