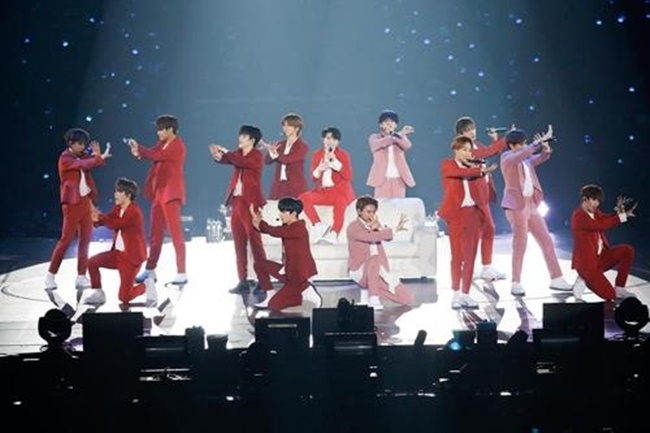 The K-pop boy band Seventeen performs during concerts at Yokohama Arena in Japan on Feb. 21 and 22, 2018, (Image: Fledis Entertainment)

SEOUL, Feb. 23 (Korea Bizwire) – The K-pop boy band Seventeen will make its debut in Japan in May, its agency said Friday.

Fledis Entertainment said the 13-member act broke the news while holding a concert titled “SEVENTEEN 2018 JAPAN ARENA TOUR SVT” in front of some 15,000 fans at Yokohama Arena in Japan on Thursday.

“Will you follow our dream? We are debuting in Japan,” the band said after singing a series of songs in Japanese.

The group’s latest album “Director’s Cut,” out on Feb. 5, gained popularity in the country, ranking fourth and second in the weekly album sales charts of Japan’s Tower Records and Oricon, respectively.

“Even before its official debut, Seventeen had sold-out concerts at Yokohama Area, proving its popularity in Japan,” the agency said in a statement, asking the public to stay tuned to see how much the band will grow as artists after the May 30 debut in Japan.

The group will continue its tour in Japan until early March.