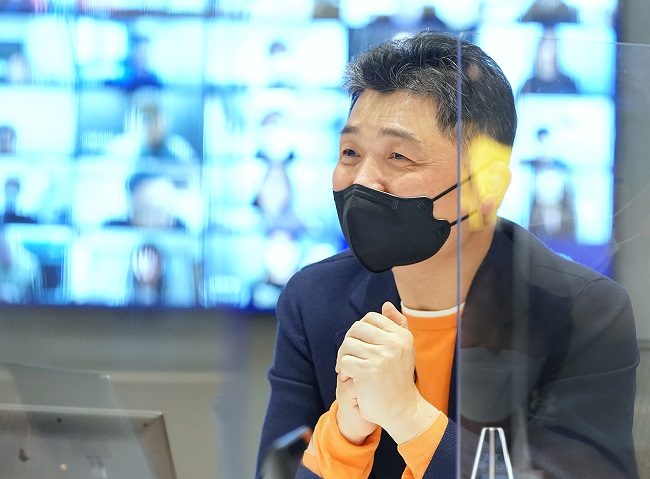 This photo provided by Kakao Corp. on Feb. 25, 2021, shows Kakao founder Kim Beom-su speaking at an online conference with his employees.

SEOUL, April 16 (Korea Bizwire) — The founder of South Korea’s top mobile messenger operator Kakao Corp. and his wholly-owned company has sold 500 billion won (US$447 million) worth of stocks in Kakao part of his pledge to donate half of his assets, a filing showed Friday.

The move came after Kim Beom-su, who serves as Kakao’s chairman, pledged in February this year to donate more than half of his assets, which at the time was estimated to be worth more than 10 trillion won.

In March, he joined the Giving Pledge, a global campaign created by Bill and Melinda Gates and Warren Buffett for the world’s wealthiest individuals and families to give back the majority of their wealth.

According to the filing, Kim sold 1.73 million shares in Kakao, worth 200 billion won, in an after-hour trading deal, while Kcubeholdings Co., which is wholly owned by Kim, sold 2.59 million Kakao stocks worth 300 billion won.

“Through the recent block deal, the funds will be used for charity activities, including the establishment of a foundation in the first half of this year, as well as for personal use,” a Kakao official said.

The sale comes a day after Kakao’s shares closed 7.59 percent higher to 120,500 won on Thursday, following the company’s 5-for-1 stock split.