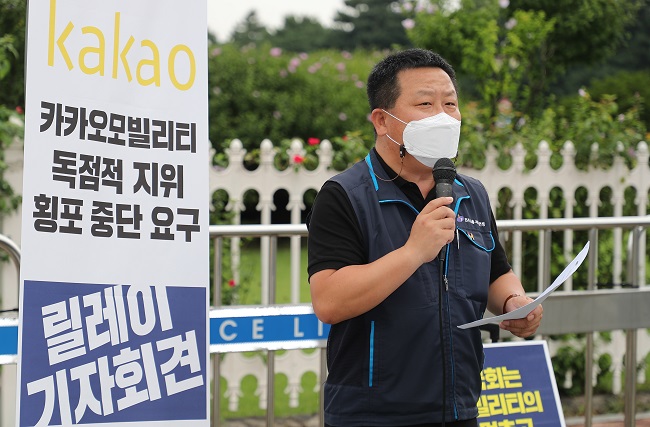 Kang Kyu-hyuk, chief of the Korean Federation of Service Workers’ Unions, protests against Kakao Mobility’s alleged abuses based on its market dominant position outside the National Assembly in western Seoul in this file photo taken on Aug. 25, 2021. (Yonhap)

SEOUL, Sept. 8 (Korea Bizwire) — Shares in South Korean tech giants Kakao Corp. and Naver Corp. plummeted Wednesday amid growing concerns that new regulations may be introduced to curb their dominance in the market.

A day earlier, ruling Democratic Party lawmakers voiced concerns over the market dominance of tech giant Kakao and its rapid business expansion in recent years during a seminar at the National Assembly.

Investor worries over the comments wiped around 6.89 trillion won (US$5.95 billion) off Kakao’s market cap, with its shares tumbling 10.06 percent to 138,500 won, and underperforming the broader KOSPI’s 0.77 percent loss.

The lawmakers took aim at mobile messaging giant Kakao over its alleged unfair actions against users and other businesses as it has rapidly grown from a messenger operator to expand into new businesses from banking to ride-hailing services.

Kakao has entered new businesses largely thanks to its Kakao Talk messaging service, which has 46.6 million users in South Korea, which accounts for around 90 percent of the country’s population.

The company currently faces growing scrutiny from lawmakers and regulators amid accusations that it abuses its market dominant position and conducts unfair business practices.

The company’s mobility unit racked up controversy recently after it reportedly punished its drivers who requested passengers to use other ride-hailing platforms.

Taxi drivers have also protested against Kakao Mobility’s service fees, arguing that they are too high.

Rep. Yun Ho-jung, the floor leader of the Democratic Party, said that Kakao’s actions, such as abuse of its market position and attempts to raise service prices, are concerning and that the party would not look on idly.

The country’s top telecommunications regulator Han Sang-hyuk said in parliament Wednesday he is looking into alleged abuses by Kakao Mobility.