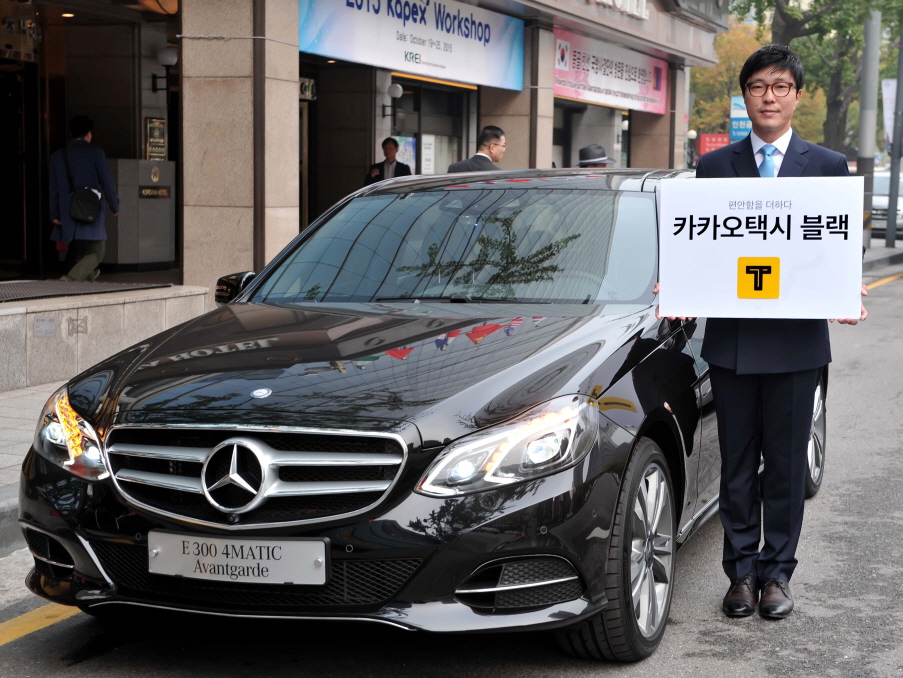 KakaoTaxi Black will be available at a minimum fare of 8,000 won (US$7.09), compared to 3,000 won charged for general taxis, to provide a high-end experience for users, the company said at a press briefing.

It operates in the same way as KakaoTaxi, Kakao’s existing cab-hailing app, where a user can request a ride to a certain destination via smartphone. However, KakaoTaxi Black will offer a complimentary beverage and professional licensed drivers in suits much like a limousine service.

Market watchers said the rollout of KakaoTaxi Black is seen as a sign of bolstering efforts to strengthen its profit sources for Kakao, since it has posted rather weak profits despite the various platform tools it has introduced to the market over the past few years.

The mobile platform operator grew into the second-largest IT venture following Naver Corp. after it merged with a top IT firm Daum Communications Corp. a year ago. It changed the company name back to Kakao in August.

Since the merger, it has made an aggressive push for mobile-based platforms and games, but intensifying competition in the industry burdened the firm with heavy marketing costs and sluggish profits.

“We came up with KakaoTaxi Black, hoping that it will create a new market and fresh demand for the luxury taxi service. We believe our new platform will lead to a new profit model for the company,” Jeong Ju-hwan, a vice president at Kakao, told reporters.

The premium taxi-hailing app, created through a joint partnership with a local taxi driver association, will start its test run with some 100 Mercedes-Benz E-Class 300s until it gets final approval from the Seoul Metropolitan Government at the end of this month for an official launch.

Kakao said it is looking to expand the number of available vehicles to a few hundred by the end of this year, with other vehicles added to the list including Korean-made cars.

It will come as an additional feature on the upgraded version of KakaoTaxi, available for both Android and iOS users, Kakao added.’