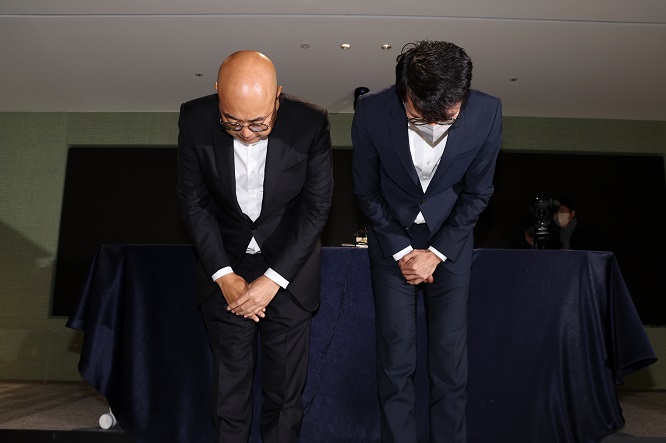 Co-CEOs of Kakao Corp. Namkoong Whon (L) and Hong Eun-taek bow their heads during a press conference at Kakao’s office building in Pangyo, just south of Seoul, on Oct. 19, 2022. (Yonhap)

SEOUL, Oct. 19 (Korea Bizwire) — A top executive of Kakao Corp. stepped down Wednesday to take responsibility for the recent disruption of the company’s mobile messenger KakaoTalk and other related services.

“As a CEO of Kakao, I feel miserable and strongly responsible for the incident. So I am stepping down from the post,” Kakao’s co-CEO Namkoong Whon said at a press conference at Kakao’s office building in Pangyo, just south of Seoul.

“I would like to give an apology to all users,” he said. “I promise Kakao will do its best to restore public confidence.”

Namkoong said he will work at the company’s emergency committee, which is to manage the company’s internet data center, and make constant efforts to map out plans to prevent recurrences.

Kakao is building its own data center in Ansan, Gyeonggi Province, with an aim to complete it next year.

He noted that his resignation will not affect the company’s future business plans, including metaverse projects, as part of its long-term strategy for fresh growth momentum.

The 50-year old businessman, a former founder of Hangame, a local online game portal operated by NHN Corp., joined Kakao in 2015 and led Kakao Games Inc. Corp. in 2015. He was named CEO of Kakao in March.

Kakao will be solely headed by Hong Eun-taek, one of the co-CEOs of the company. 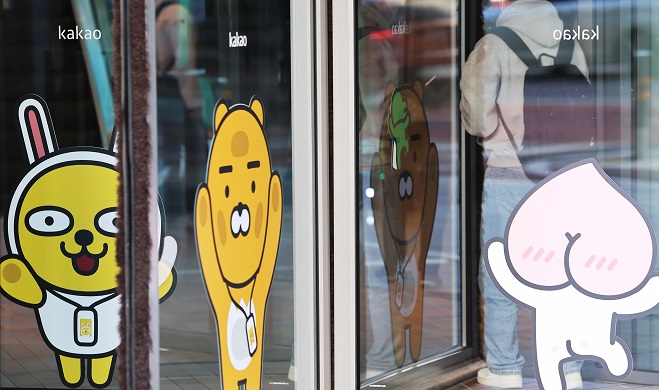 This photo taken on Oct. 17, 2022, shows an office building of Kakao Corp. in Pangyo, just south of Seoul. (Yonhap)

The announcement came as Kakao services, ranging from KakaoTalk to online banking and ride-hailing services, have resumed complete operation.

Hong said he will do his best to intensively deal with the aftermath of this incident and come up with effective plans to prevent recurrences.

“I think it is more important to thoroughly delve into the case, although it will take time to repair all defects,” the Kakao chief said during the press event. “We will fully open probe results to the public.”

Earlier in the day, SK C&C, which hosts Kakao’s data servers, started to fully supply electric power to Kakao’s disrupted servers in Pangyo, just south of Seoul, a move that led to the restoration of 100 percent of servers at the data center.

On Saturday, a fire at the data center caused the worst server outage ever for South Korea’s dominant messenger and the company’s internet portal Daum.

The fire was extinguished after some eight hours, but an immediate power shutdown at the data center caused a server outage in Kakao’s services.