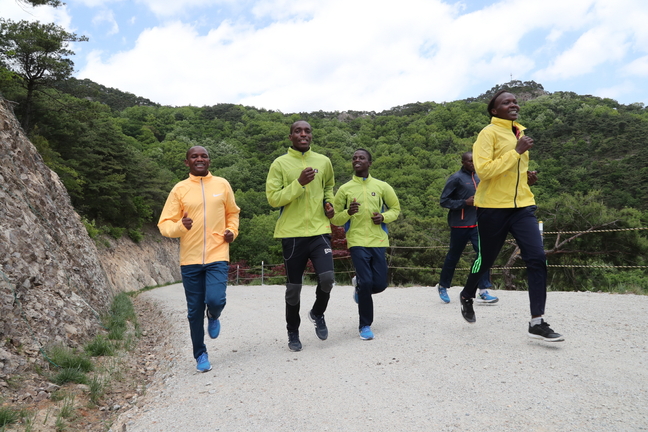 The trail, which was officially opened to the public two years ago, spans 10 kilometers from Solhyang Park to Songni Tunnel, all situated within the district of Boeun-gun.

With its gradual slope, the trail is suitable for walkers or joggers, who are freed of having to worry about the knee pain that usually follows such exercise due to the type of sand that makes up the course.

Experts have also said that the phytoncide that the pine trees let out helps visitors relieve stress and focus on their run.

As soon as the running course opened its doors, it was an instant hit with runners who cited the venue as an optimal trail running course.

Marathoners from Kenya alongside high-level officials of the National Marathon Association gave the course a “thumbs up” after giving it a try.

At the first Songnisan Marathon held in October last year, over 500 participants had a hard time keeping their eyes on the course as they were in awe of the beautiful scenery laid out ahead of them.

Situated at 430 meters above sea level with an abundance of trees providing shade, the trail also transforms into off-season training grounds in the summer.

A military official said that as many as 10 sports teams including runners, soccer players and baseball players will be undergoing training here in the summer.

On July 15, a marathon will be held on this very trail to commemorate the 17th anniversary of the National Marathon Association’s founding.