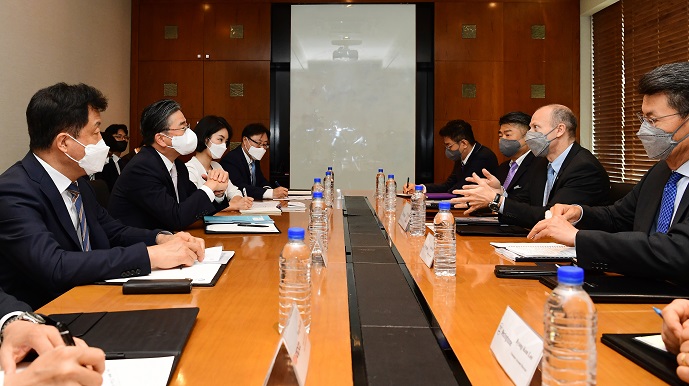 The agreement was made during a meeting between KEPCO chief Cheong Seung-Il and Westinghouse CEO Patrick Fragman on Wednesday.

Chung Jae-hoon, chief executive of Korea Hydro & Nuclear Power Co. (KHNP) — the operator of the country’s nuclear power plants — also held a separate meeting with Fragman on Thursday, according to the utility firm.

Fragman and other senior company officials are in South Korea for a three-day stay from Wednesday.

During the meetings, the two sides discussed ways of enhancing cooperation to jointly make inroads into the overseas nuclear power generation markets and further expanding ties in various related fields, KEPCO said in a release.

KEPCO, KHNP and Westinghouse plan to draw up detailed plans by setting up a joint working group or committee, the company said.

The meetings came as South Korea and the U.S. agreed to deepen ties in the nuclear energy sector during a summit between Presidents Yoon Suk-youl and Joe Biden held in Seoul in May.

The Yoon government has vowed to promote the nuclear industry and export 10 nuclear power plants by 2030, marking a turnaround from the previous administration’s nuclear phase-out.