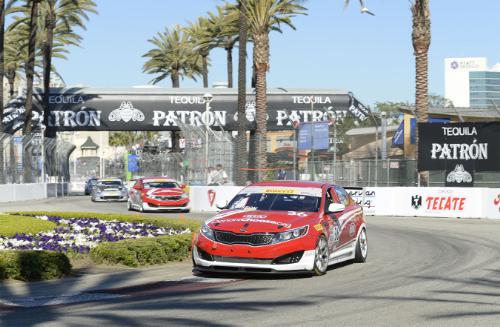 IRVINE, Calif., April 25, 2014 (Korea Bizwire) – Kia Racing scored a pair of podium finishes – including its first victory of the Pirelli World Challenge (PWC) season – on the temporary street circuit in Long Beach, Calif., nearby the brand’s U.S. headquarters in Irvine, Calif. The team takes that momentum into what could be considered its second “homecoming” race of the year, at Barber Motorsports Park in Birmingham, Ala.

Just a short distance from Kia Motors Manufacturing Georgia (KMMG), where their cars first rolled off the production line, teammates Nic Jönsson and Mark Wilkins will give the turbocharged Optimas their racing debut on the 2.38-mile natural-terrain road course. Jönsson and Wilkins sit first and fifth in the Driver Championship points while Kia is second in the Manufacturer standing, ahead Chevrolet, Porsche and Aston Martin.

“We’re proud of the Kia Racing team and its accomplishments. The results in Long Beach not only showcased the performance and durability of our cars, but also gave us a chance to show our support of the racing program in person, with more than 200 Kia Motors America (KMA) team members joining us at the track to cheer on the team,” said Michael Sprague, executive vice president of sales and marketing, KMA.

“I am confident that the Mark, Nic and the Kinetic Motorsports crew can keep the momentum going heading to Barber Motorsports Park and put on a show for another hometown crowd, namely our KMMG guests in attendance, many of whom may have had a hand in building these two Optima turbos.”

Kia Racing has visited Barber Motorsports Park previously, most recently in 2012 with the Forte Koup in Grand-Am Continental Tire Sports Car Challenge (CTSCC).  This weekend, however, marks the debut of the No. 36 DonorsChoose.org and No. 38 B.R.A.K.E.S.

Optima turbos on the 15-turn purpose-built circuit.  This momentous occasion is made even more special as it is a homecoming of sorts for the two racing Optimas, which were first assembled just two hours away at Kia’s U.S. manufacturing facility in West Point, Ga.  From assembly line to race track in just 125 miles, the Kia Racing team is ready to showcase the durability, reliability and performance of these incredible racecars, which each sport a special message of thanks to the KMMG team members across their rear bodywork.

Another Kia racing vehicle will make its competition debut this weekend at Barber, too. KMA racing partner Kinetic Motorsports will unveil two all-new 2014 Forte Koup entries in the  PWC Touring Car A (TC-A) class.  Powered by 1.6-liter turbocharged, gasoline direct injected, four-cylinder engines, the No. 36 Richard Wolfe Trucking Forte Koup will be piloted by Jason Wolfe, and No.

38 Korean Air Kinetic Motorsports Forte Koup will be piloted by none other than team owner Russell Smith.  With help from Carriage Kia in Gainesville, Ga., these two privateer entries were prepared for competition in record time.  These new Forte Koups inherit a winning tradition as the nameplate’s predecessor scored Kia’s first professional road racing championships in the 2011 CTSCC.

Televised coverage of round three at Barber Motorsports Park will be broadcast Saturday, May 10 at 4 pm ET on the NBC Sports Network.  Race fans can also watch coverage of the races online at www.world-challengetv.com and catch the latest news and updates from the Kia Racing Facebook page at www.facebook.com/kiaracing and follow the team on Twitter: @KiaRacing.

Kia Motors America (KMA) is the marketing and distribution arm of Kia Motors Corporation based in Seoul, South Korea.  KMA proudly serves as the “Official Automotive Partner” of the NBA and LPGA and surpassed the 500,000 annual sales mark for the second consecutive year in 2013 following the launch of seven all-new or significantly redesigned vehicles.   KMA offers a complete line of vehicles, including the rear-drive K900 flagship sedan[1], Cadenza premium sedan, Sorento CUV, Soul urban passenger vehicle, Sportage compact CUV, Optima midsize sedan, Optima Hybrid, the Forte compact sedan, Forte5 and Forte Koup, Rio and Rio 5-door sub-compacts and the Sedona midsize multi-purpose vehicle, through a network of more than 765 dealers across the United States.  Kia’s U.S. manufacturing plant in West Point, Georgia, builds the Optima* and Sorento* and is responsible for the creation of more than 14,000 plant and supplier jobs.

*The Sorento and Optima GDI (EX, SX & Limited and certain LX Trims only) are assembled in the United States from U.S. and globally sourced parts. [1] 2015 K900 available in select trims and in select markets with limited availability.