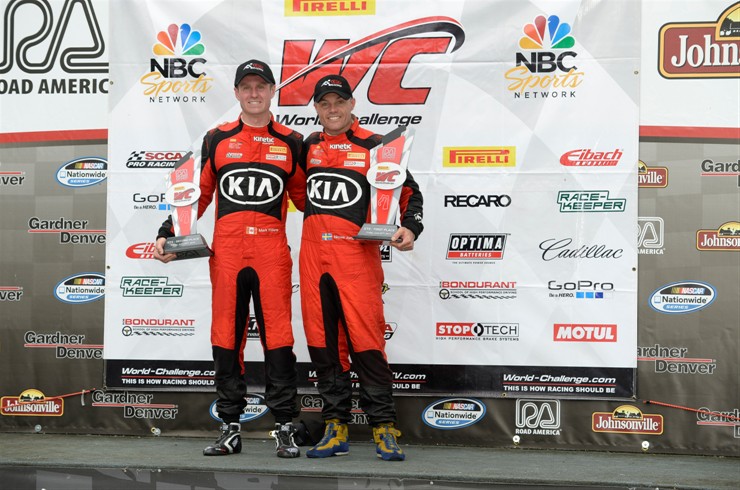 “When Kia first approached us about racing back in 2010, they said they wanted to change people’s perceptions about the brand and the performance and durability of their cars,” said Jönsson, who returned from contesting the famed 24 Hours of Le Mans just prior to the Road America weekend. “Well, I can’t think of a better way to showcase the quality of the U.S.-built* Kia Optima than to outrun some of the world’s best twice in the same weekend!”

Qualifying for Friday’s race was cancelled due to heavy rain, so the starting grid was set by championship points coming into the weekend, which meant Wilkins started second and Jönsson fourth. Jönsson darted into the lead on the first lap, and Wilkins quickly tucked in behind him. Wilkins posted the fastest lap of the race, and the two never looked back during the 50-minute contest, scoring Kia’s first one-two victory since 2012, the Korean brand’s first season in the PWC.

Saturday’s starting grid was set by lap times from the previous day’s race, putting Wilkins’ No. 38 PutOnTheBrakes.org Optima turbo on pole position with Jönsson’s No. 36 DonorsChoose.org Optima alongside. As the green flag waved and the 24-car GTS field launched from the series’ signature standing start, Jönsson again charged into the lead with Wilkins running a close second. Only a few laps later, however, a major incident involving a GT-class Ferrari and McLaren brought out a full-course yellow, freezing the running order. Both drivers were unhurt, but during the lengthy clean up, Wilkins’ car began suffering intermittent electrical issues. When the green flag waved again with just 10 minutes left, the Kia duo of Jönsson and Wilkins once again ran first and second, but Wilkins’ electrical gremlins slowed his progress and he would eventually settle for seventh.

“It was a bit of a surprise to have such a promising race end without a podium finish, given how tough and reliable the Optimas have been for us, but to run at this level with a production-based, four-door, front-wheel-drive sedan, means we’re really testing the limits of every component in the car,” said Wilkins, who has four podium finishes this season, including a win at Barber Motorsports Park in Birmingham, Alabama. “Overall, it was an outstanding result for the team and for Kia. We’re focused on winning the Manufacturer Championship, and the points we scored have put us in great position halfway through the season.”

Rounds seven and eight of the Pirelli World Challenge are scheduled to air on the NBC Sports Network Saturday, July 4 at 3:30 p.m. PT/6:30 p.m. ET and Saturday, August 2 at 9:30 p.m. PT/12:30 a.m. ET. Race fans can also catch the latest news and updates from the track at www.facebook.com/kiaracing or Twitter at @KiaRacing.

Kia Racing returns to the track for rounds nine and ten of the PWC July 18-20 in Toronto, Ontario, Canada.

Kia Motors America (KMA) is the marketing and distribution arm of Kia Motors Corporation based in Seoul, South Korea.  KMA proudly serves as the “Official Automotive Partner” of the NBA and LPGA and surpassed the 500,000 annual sales mark for the second consecutive year in 2013 following the launch of seven all-new or significantly redesigned vehicles.   KMA offers a complete line of vehicles, including the rear-drive K900** flagship sedan, Cadenza premium sedan, Sorento CUV, Soul urban passenger vehicle, Sportage compact CUV, Optima midsize sedan, Optima Hybrid, the Forte compact sedan, Forte5 and Forte Koup, Rio and Rio 5-door sub-compacts and the Sedona midsize multi-purpose vehicle, through a network of more than 765 dealers across the United States.  Kia’s U.S. manufacturing plant in West Point, Georgia, builds the Optima* and Sorento* and is responsible for the creation of more than 14,000 plant and supplier jobs.

Information about KMA and its full vehicle line-up is available at www.kia.com. For media information, including photography, visit www.kiamedia.com.  To receive custom email notifications for press releases the moment they are published, subscribe at www.kiamedia.com/us/en/newsalert.
*The Sorento and Optima GDI (EX, SX & Limited and certain LX Trims only) are assembled in the United States from U.S. and globally sourced parts.