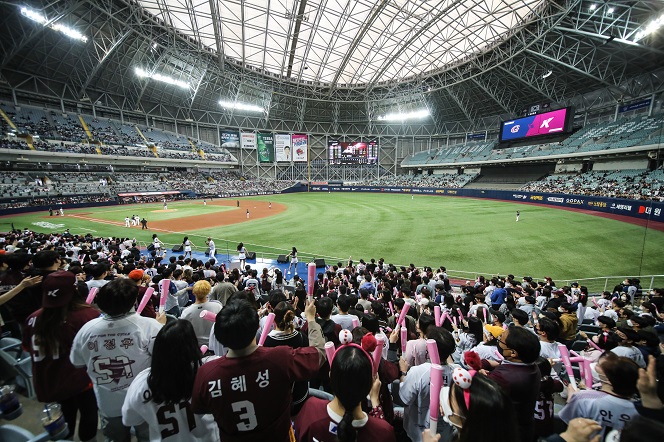 Baseball fans take in a Korea Baseball Organization regular season game between the home team Kiwoom Heroes and the Lotte Giants at Gocheok Sky Dome in Seoul on April 2, 2022, in this photo provided by the Heroes. (Yonhap)

SEOUL, April 5 (Korea Bizwire) — When the new South Korean baseball season began Saturday, not only were stadiums back operating at full capacity, but fans in the stands were allowed to consume food and drinks from their seats — something they didn’t enjoy for most of last season due to COVID-19 protocols.

With virus restrictions being eased or lifted altogether across the nation, however, one club in the Korea Baseball Organization (KBO) got the short end of the stick.

Starting Tuesday evening, fans attending home games of the Kiwoom Heroes at Gocheok Sky Dome in Seoul won’t get to eat and drink from their seats as those at other ballparks can.

That’s because the dome, the only one of its kind in the country, is labeled as an “indoor” facility, where eating and drinking from seats is prohibited.

Instead, fans must use designated concession tables in the concourse, as they had done before the easing of virus restrictions.

In the days leading up to Opening Day, the KBO had promoted the fact that eating and drinking would be fully allowed everywhere, hoping the lifting of such restrictions would attract more fans.

But then the Korea Disease Control and Prevention Agency decided Friday, the eve of Opening Day, that eating and drinking would remain prohibited at the dome.

Because it came at such short notice, fans attending games at the dome Saturday and Sunday were still allowed to have food in the stands. The ban will kick in starting with Tuesday’s game against the LG Twins. 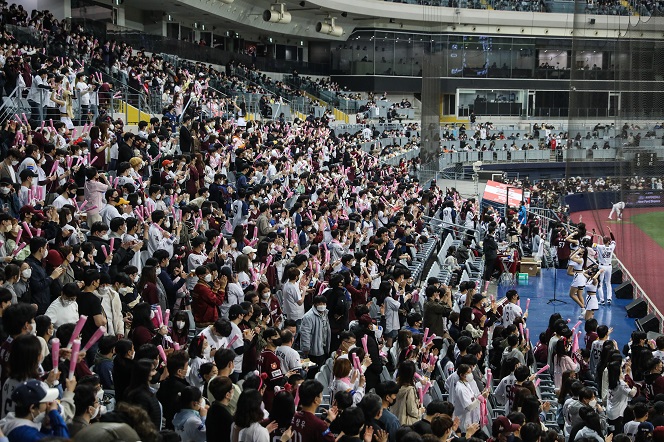 Baseball fans take in a Korea Baseball Organization regular season game between the home team Kiwoom Heroes and the Lotte Giants at Gocheok Sky Dome in Seoul on April 2, 2022, in this photo provided by the Heroes. (Yonhap)

The decision by the national health authorities has left Kiwoom and KBO officials alike baffled.

“Before the season, we checked with the KBO on multiple occasions to see if our fans would be allowed to eat and drink in the stands, and we got the green light every time,” a Kiwoom official said on the condition of anonymity.

“Then the day before the season, we were told we couldn’t do that. We were flabbergasted.”

An official from the KBO said the government did an about-face the day before Opening Day, after maintaining for weeks that Gocheok Sky Dome would be treated the same as all the other stadiums.

The dome doesn’t have a retractable roof, but team officials say its ventilation system ensures fresh air quality inside over the course of a game.

Sending fans out to concession tables in the narrow concourse at Gocheok Sky Dome also seems to defeat the purpose, because the areas often get quite crowded, and fans end up being in much closer proximity to one another than they would be if they were just eating from their own seats.

The Heroes filled a little over half of their 16,000-seat ballpark Saturday and then only drew 6,115 fans Sunday.

The “indoor” designation also hurt the domed ballpark last year when KBO stadiums opened back up in a limited capacity.

Open-air venues were allowed to accept fans at up to 50 percent capacity, but Gocheok could only do so at 20 percent, because it was an indoor facility.