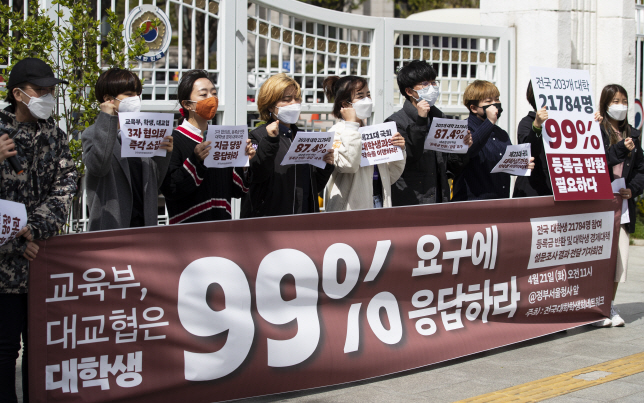 Members of the National University Student Council Network hold a news conference in downtown Seoul on April 21, 2020, to demand a tuition refund for the spring semester. (Yonhap)

SEOUL, June 15 (Korea Bizwire) — A university in Seoul is moving to become the country’s first university to partially refund tuition amid the ongoing pandemic, possibly sending shock waves in the higher education circles.

As the global crisis caused by the novel coronavirus has created a major disruption in the way the country’s higher education institutions offers classes, students have increasingly demanded to get back some of their tuition and fees.

While most colleges and universities have turned a deaf ear to the growing calls and the education ministry seems reluctant to intervene, some are actually considering a refund.

One such example is Konkuk University in Seoul, which has been holding a series of meetings with the Student Council since April, to discuss the size of a partial refund. The result is expected to come out within this week.

The refund for its 15,000-strong student body will be offered in the form of a tuition cut for the fall semester.

When it happens, it would be the first higher education institution to acknowledge the shortfalls of online classes and students’ rights to quality education.

The discussion started in April, when the university responded to the council’s repeated calls for a review of the tuition policy and a possible partial refund.

The school reportedly referred to a poll conducted on 4,000 students, which showed the respondents were in overwhelming favor of a refund.

A person with direct knowledge of the discussion said the council demanded the school use “every possible financial means” to make the payment. 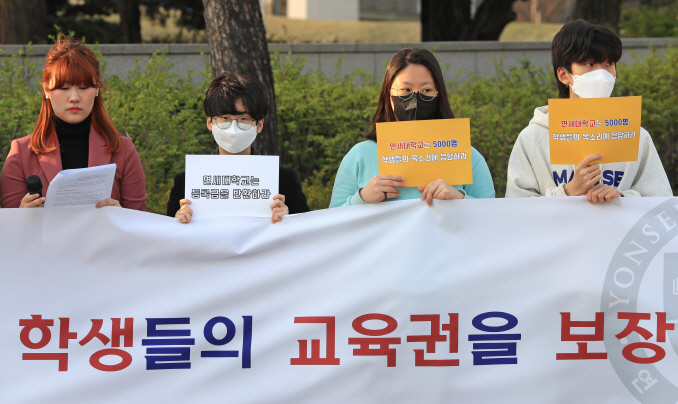 A decision at the university is likely to have repercussions for similar discussions in other schools.

Since the pandemic forced schools to shut down campuses and offer online classes, there have been continuing complaints from students that they were not getting what they paid for.

Students’ groups nationwide have called for universities to compensate for what they argued was a violation of their “right to learn.” One student advocacy group is looking for participants for a class-action lawsuit demanding tuition refunds.

But most universities maintain that it is nearly impossible to cough up tuition, citing a rise in pandemic-related costs for setting up online classes and running disinfection and quarantine programs on campus.

Regarding Konkuk University’s move to refund, an official from the ministry said the decision is being made “entirely on its own,” adding that most universities were unwilling to make such a move.

The Korean Council for University Education, a consultative group for the country’s universities, said that it was not considering a refund.

But it would review diverting a state-funded budget to subsidize students if the government eases restrictions on its use. The budget in question is supposed to be spent only for education and research purposes.

A ministry official said spending the budget on student subsidies does not meet the budget’s original purposes but added that the ministry was mulling measures to help support universities that offer financial assistance to students affected by the pandemic.