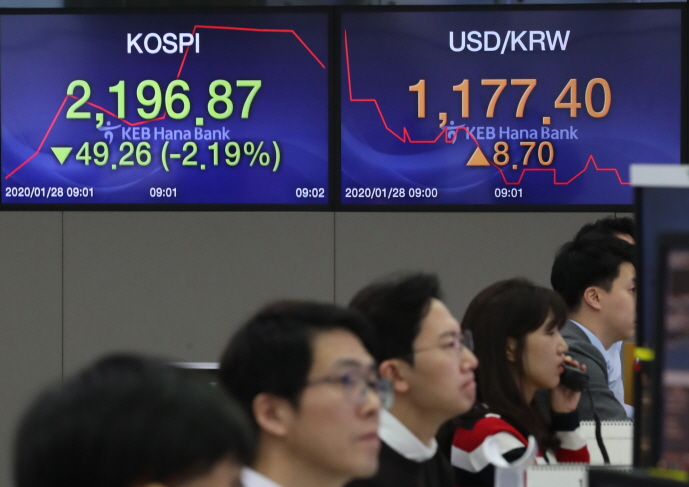 An electronic signboard at KEB Hana Bank in Seoul shows the benchmark Korea Composite Stock Price Index (KOSPI) down 2.19 percent to 2,196.87 in early trading on Jan. 28, 2020, on concerns over the new deadly coronavirus spreading in China. (Yonhap)

SEOUL, Jan. 28 (Korea Bizwire) — Major South Korean companies are scrambling to minimize any possible fallout from the Wuhan coronavirus by pulling their staff out of China and curbing trips there, industry sources said Tuesday.

The move is meant to minimize contact with people as the coronavirus can spread through human-to-human transmission.

Hyundai and Kia, the group’s two key affiliates, have instructed its employees to refrain from visiting Chinese cities hit hard by the coronavirus.

“We are monitoring those who are visiting China,” a Hyundai Motor official said.

South Korean electronics giant Samsung Electronics Co. has created a task force to monitor the situation of its employees in China and restrict business trips to China.

Samsung C&T Corp., which is building Samsung Electronics’ memory chip plant in the northwestern Chinese city of Xian, has taken precautionary measures by putting thermometers and masks in places at the construction site.

SK hynix Inc., the world’s No. 2 memory chip producer, has already banned its employees from making business trips to Hubei province, whose capital is Wuhan.

SK hynix has also instructed its employees to not visit other cities as well.

South Korean steelmaker POSCO said it will ensure that its four employees in Wuhan, the capital city of Hubei Province in central China, return home as quickly as possible.

POSCO said it will not operate its steel processing center in Wuhan until this coming Sunday, the day that the Chinese government extended the Lunar New Year holiday to in an attempt to contain the spread of the coronavirus. 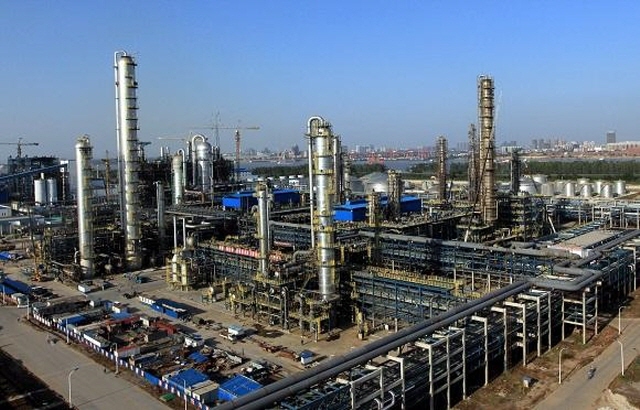 SK Innovation Co., a major energy and chemical company in South Korea, said it has minimized business trips to China as a precaution against the coronavirus.

“Any trips to China are subject to approval of the company’s executives,” a SK Innovation official said.

In December, SK Innovation built its first electric vehicle battery cell manufacturing plant in Changzhou in the eastern Chinese province of Jiangsu in the latest move to tap deeper into the world’s largest EV market.

SK Global Chemical Co., which is wholly owned by SK Innovation, has brought home about 10 employees from its plant in Wuhan before China imposed a lockdown on the ground zero of the new virus.

The employees have not reported to their companies for two weeks — the incubation period of the deadly virus -– as they monitor their condition.

SK Global Chemical has banned its officials from visiting Wuhan.

Hanwha Group has also banned its employees from making business trips to China.

South Korea remains vigilant as the fourth confirmed case of the virus was detected here Monday.