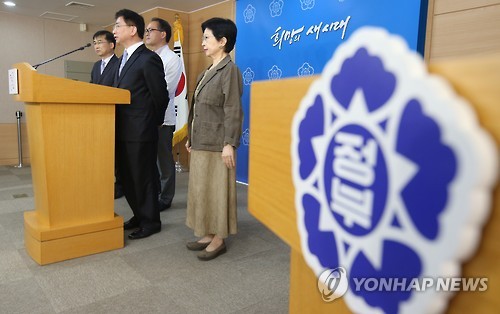 MERS is a viral respiratory illness that is fairly new to humans, with only 1,154 reported cases in 24 countries since the first case was confirmed in Saudi Arabia in 2012. (image: Yonhap)

SEOUL, May 31 (Korea Bizwire) — The government said Sunday it will soon launch a task force of government officials and civilians to enhance a monitoring system for MERS and take all-out measures to prevent the spread of the viral disease.

“We will launch a joint task force of government officials and civilians for all-out efforts against the disease,” Health Minister Moon Hyung-pyo told reporters. “We are determined to shed light on the cause of the disease and the route of its spread.”

Moon’s remarks came as the number of the Middle East Respiratory Syndrome cases rose to 15 in South Korea as of Sunday.

The ministry confirmed two more MERS cases Sunday, bringing to 15 the total number of people infected with the deadly disease.

MERS is a viral respiratory illness that is fairly new to humans, with only 1,154 reported cases in 24 countries since the first case was confirmed in Saudi Arabia in 2012.

There is no vaccine or treatment for the disease, which has a very high fatality rate of about 40 percent.

Anxiety is mounting here as the number of MERS patients seems to be increasing fast in recent days.

Five people were diagnosed with MERS on Friday alone, including a South Korean traveler in China.

Moon said his government has been tracking patients and medical staffs at the hospital where the first patient was confirmed.

“We are also cooperating with foreign countries to confirm what kind of virus variations are involved,” he said.

This coming week will be crucial to the country in terms of blocking the spread of the disease, he said.

He apologized to the nation for the failure by the government to properly quarantine the first group of patients.

The ministry revealed two more confirmed cases Sunday, identified only by the English initial of their family names, N and O, saying N was a patient housed at the same hospital ward as one shared by the country’s first-ever patient, a 68-year-old man who caught the disease while traveling to the Middle East in mid-April.

O apparently contracted the disease while taking care of her mother at the hospital ward shared by the first patient, the ministry said. The mother is currently restricted to her house.

Out of the 13 other patients, 10 were reported in the hospital where the country’s first MERS case was confirmed on May 20.

The hospital has temporarily closed its doors as many medical staff members have been placed in quarantine and are being closely monitored as they came in close contact with infected patients.

Rumors and fearful comments about MERS and how it is transmitted are circulating through social network services, apparently reflecting growing worries about the virus.

The ministry has said it will take “stern” action, including launching police investigations, against those who intentionally spread groundless rumors about the disease.