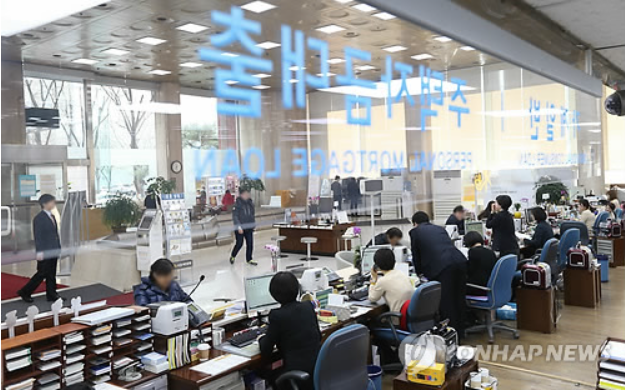 Household loans, which include mortgage lending, extended by local lenders reached 566 trillion won (US$503 billion) in February, gaining 3.7 trillion won from the previous month, more than twofold of January’s 1.4 trillion won gain, according to the preliminary data by the Bank of Korea (BOK).

Growth in home-backed loans accounted for most of the on-month growth. Mortgage lending jumped 4.2 trillion won to 413.6 trillion won, accelerating from a 2.5 trillion won increase in January.

The on-month increase was roughly twofold of the gains in previous years. February household lending averaged 1.3 trillion won between 2008 and 2014, according to BOK data.

The central bank attributed the unusually high growth to robust home transactions. Apartment transactions in Seoul came to 8,600 houses last month, accelerating from 6,600 houses a month earlier. The February reading is also higher than an average 5,100 transactions in the month of February between 2006 and 2014.

Growth of other household loans, such as those used for living expenses, slipped 600 billion won to 151.5 trillion won as income earners received end-year bonuses from their companies, the central bank explained.

Surging household debt has bolstered views it will push the central bank to keep the base rate, currently at a record-matching low of 2 percent, on hold.

In a poll by Yonhap Infomax, the financial news arm of Yonhap News Agency, 14 out of 18 analysts forecast the BOK to extend its wait-and-see approach to a fifth consecutive month in its policy meeting Thursday.

A majority of analysts, 11 out of 17, still forecast high chances of a rate cut in the second quarter, especially in April when the central bank is likely to trim its growth forecast for Asia’s fourth-largest economy faltering from feeble growth. One analyst didn’t submit a forecast for the three-month period.