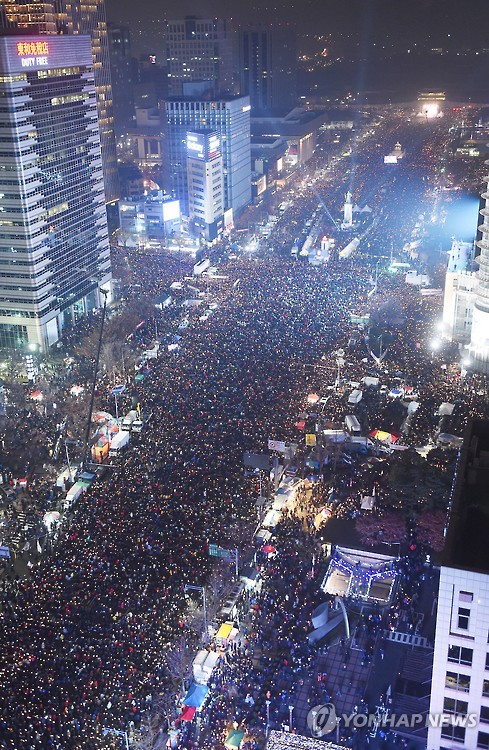 “At least a million lit up their candles for the country, but the police estimated the number at just 200,000,” said the developer. “It angered me, so I decided to create the app.” (image: Yonhap)

SEOUL, Nov. 28 (Korea Bizwire) – For the fifth weekend in a row, hundreds of thousands of Koreans took to the streets demanding the resignation of President Park Geun-hye, who is suspected of a host of illicit activities related to corruption and abuse of power. The latest protests, however, were noted by their integration with IT technologies, with protesters developing apps and services that can better facilitate nationwide demonstrations.

Among such services is a location-based mobile web page that offers college students a quick location guide to where their respective school members are gathered in crowds of thousands.

The service takes into account the slow network speed at massive rallies, which has been the case for protests in Gwanghwamun, Seoul, and also features text-based location information that requires less Internet data.

The site was developed by Park Hang, vice president of KAIST’s student body. He initially created the service exclusively for KAIST students, but recently expanded the service after requests from other university student bodies.

“I decided to come up with the page after a few students told me it’s often difficult to find school members at protests,” he said.

A mobile application called “Check Attendance” allows for a better estimate of the total number of protesters, by automatically checking in a person once they step into a 2-kilometer radius of the Gwanghwamun area.

The app, according to the developer, was created to provide a better picture of the number of people gathered, given the discrepancies between police estimates and organizer claims.

“At least a million lit up their candles for the country, but the police estimated the number at just 200,000,” said the developer. “It angered me, so I decided to create the app.”

FireChat is a messaging app first introduced for the 2014 Hong Kong protests, but it’s now gaining popularity among Korean protesters seeking to avoid network paralysis. The app uses mesh networking, which works by using nearby smartphones’ Bluetooth or Wi-Fi links to relay messages, and is not affected by slow mobile networks.

Among the most common mobile applications are of course the candlelight apps, which are apps that display candles on smartphone screens.

They work best in wind and rain, or simply for those who forget to bring an actual candle out to a protest. They are also the perfect solution against the controversial remark by pro-Park Geun-hye lawmaker Kim Jin-tae, who said “candles are just candles, they will be blown out by the wind”.

“The rally (on November 26) can be seen as the first of its kind that naturally integrated itself with information technology,” said a software science professor Chung Tae-myung at Sungkyunkwan University. “IT technology has made another step closer towards our livelihood, now affecting even rallies and protests.”