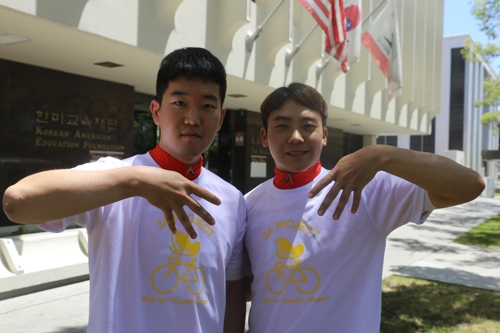 The students — 25-year-old Baek Hyun-jae and 22-year-old Lee Ho-jun — recently arrived in Los Angeles with their bicycles ahead of their ambitious bid to cross the United States on bike in 80 days.

They plan to pedal along a 6,600-kilometer route across the American continent from southwest to northeast, departing Los Angeles on Friday and arriving in New York on Sept. 4 via Phoenix, Albuquerque, Oklahoma, Kansas City, St. Louis, Chicago, Pittsburgh, Washington DC and Philadelphia.

They will hold a departure ceremony in front of a memorial statue honoring the Korean victims of sexual slavery by the Japanese military, euphemistically called “comfort women,” in LA’s Glendale area.

The students said their cross-country bicycle ride is primarily aimed at publicizing the issue of comfort women as an infringement on the human rights of all women throughout the U.S.

They argue that the tragedy of comfort women is no longer a political and diplomatic issue limited to South Korea and Japan. The comfort women issue has been one of the biggest sources of conflict between Seoul and Tokyo, as the latter has refused to officially apologize or compensate the Korean victims.

“We have chosen the U.S., not Japan, as the destination of our cross-country trip in order to publicize the issue of comfort women as a violation of women’s human rights. The U.S., as a third-party country, is expected to genuinely recognize the issue of women’s rights,” said Lee, who studies political science at Incheon National University in Incheon, west of Seoul.

Baek, a student of theology at Baekseok University in Cheonan, south of Seoul, said that he decided to participate in the cross-America cycling project as a citizen of the world as well as a South Korean citizen.

“I’m proud to be able to let the world know of the comfort women issue on behalf of all the aging survivors,” said Baek. “Spending three months in my 20s on an activity like this will be the most valuable lesson in my lifetime.”

The two students said they came to have the courage to campaign for the comfort women after listening to the testimony of the late Kim Hak-sun, who, in 1991, became the first former sex slave to speak about her horrific ordeals at the hands of Japan’s imperial troops.

They are now members of the so-called “3A Project,” which stands for Admit, Apologize and Accompany. In other words, the project calls on Japan to admit to the slavery of women in its colony and apologize for the past wrongdoings, and it asks all people to accompany the victims.

Lee and Baek have been chosen to carry out the project’s fourth annual trans-American bike trip. Three duos have already completed the same mission in the past three years, their trips being covered by the LA Times, NBC, Fox, ABC and other U.S. media.

They stated that riding bicycles, which are powered by the heart’s energy, is the best way to show passion.

During the ride, the students will hold street rallies in LA, Chicago, Washington DC, Philadelphia and New York, together with other Korean activists, to publicize the comfort women issue.