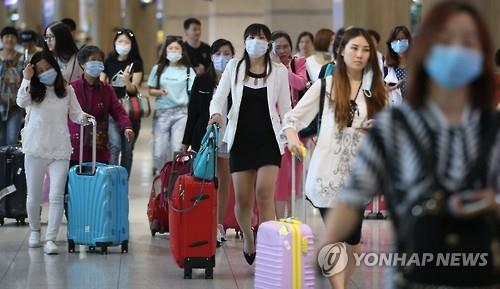 SEOUL, June 3 (Korea Bizwire) — Fears over the Middle East Respiratory Syndrome (MERS) are casting a pall over South Korea’s tourism and retail industries as the respiratory illness does not show signs of a letup, prodding overseas travelers to cancel their trips and locals to abstain from outdoor activities, industry sources said Wednesday.

South Korea on Tuesday reported its first two deaths from MERS since the first confirmed case two weeks ago, fueling growing concerns about its spread in the country.

Although MERS has not yet seriously affected the domestic economy due to the government’s efforts to contain the disease, tour agencies are already feeling its impact.

The Korea Tourism Organization, a state-run tourism promotion agency, estimated about 2,000 Chinese and 500 Taiwanese have called off their trips here as of Monday, expecting more cancellations for trips scheduled this month as tourists remain watchful about further developments.

Concerns over the virus are especially high among Chinese after a South Korean man who tested positive for MERS flew to Hong Kong on May 26 and subsequently went to southern China.

Tour agencies specializing in Chinese expected the cancellation rate to rise between 15 and 20 percent this month, which translates to about 70,000 people, considering the number of monthly visitors from the Asian neighbor, the biggest source in the tourism industry.

According to Hana Tour, the nation’s No. 1 agency, 300 Chinese who booked tour programs departing from Beijing and Shanghai have called off their trips scheduled between June 4 and 12.

“If more deaths from MERS are reported and that has ripple effects nationwide, we will have difficulties in attracting Chinese tourists,” a Hana Tour official said. “A considerable number of Chinese tourists may opt for Japan instead of Korea.”

Japan has seen a huge influx of Chinese this year thanks to the lower yen and relaxed visa rules despite chilly diplomatic ties between the two Asian neighbors.

Local retailers and duty-free shops in tourist attractions remained on high alert to beef up sanitary measures, as many foreigners were seen wearing masks in busy shopping areas.

“Although last weekend’s sales were not affected by MERS, an increasing number of patients is expected to have a negative impact (on sales),” said an official at a department store in downtown Seoul.

Market watchers expected weakened sentiment among consumers and travelers to have a ripple effect across industries.

“Consumers may be reluctant to go populous areas, which could hamper sales of tour agencies, movie theaters and the leisure industry in the short term,” Yang Il-woo, a researcher at Samsung Securities, said. “The falling number of Chinese could also affect duty-free shops and casinos that heavily rely on Chinese visitors.

In contrast, online shopping malls saw increased sales of food since late May compared with before the outbreak of the disease, while convenience stores sold more lunch boxes and hand sanitizers, according to industry sources.

“Food sales have risen since late May, when more people were infected with MERS, showing a similar pattern with when a new flu spreads in the country,” said an official at Auction, an online shopping mall operator.