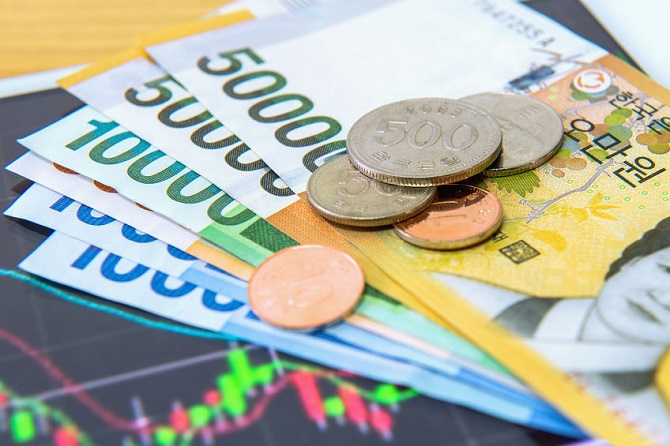 SEOUL, Aug. 5 (Korea Bizwire) — In the face of the escalating American-Sino trade war, its own trade feud with Japan and its worsening economic conditions, South Korea’s currency is set to further slide in the coming weeks, probably touching the 1,250-won threshold.

After opening at 1,203.60, the local currency expanded its losses against the dollar on news that the Chinese yuan fell to the lowest level on record against the greenback on growing worries that the world’s two largest economies’ sparing over trade may continue longer than expected.

The local currency began to slide despite a recent U.S. rate cut, usually a source of weakening for the greenback.

“The dollar continued to strengthen as hopes for aggressive rate cuts (on the U.S. part) waned,” Lee Sang-jae, an economist at Eugene Investment & Securities, said.

Despite the first U.S. rate cut in more than a decade last month, U.S. Fed Chairman Jerome Powell said the reduction did not signal the start of a series of quantitative easing.

The U.S. key rate currently sits at a range of 2.0 percent to 2.25 percent, significantly higher than that of South Korea, which is at 1.50 percent.

Such a gap often leads to an outflow of foreign investment from less advanced economies such as South Korea.

Still, Lee said the gap in the key interest rates was not the only problem facing Asia’s fourth-largest economy and its currency in what he called a “trilemma.”

“The United States’ move to impose additional import tariffs on Chinese goods is prompting concerns of a global economic slowdown, which in turn strengthens the dollar,” he said.

Washington has announced a plan to impose 10 percent tariffs on an additional US$300 billion worth of Chinese imports, apparently expanding its trade dispute with the world’s No. 2 economy.

The U.S. has been imposing 25 percent tariffs on $250 billion worth of Chinese goods since June, shortly after its trade negotiations with Beijing fell apart.

South Korean exports are expected to face additional difficulties due to the country’s own trade dispute with Japan, sparked by Japan’s export restrictions targeting the country’s key export products — semiconductors and display panels.

“Japan’s export restrictions are causing concerns of slower growth for the South Korean economy, which causes the won to weaken,” Lee said.

The South Korean economy grew 1.1 percent in the second quarter of the year from three months earlier, rebounding from a 0.4 percent on-quarter decline in the first quarter.

But Asia’s fourth-largest economy is widely forecast to miss its yearly growth outlook of 2.4 percent proposed by the Bank of Korea.

Given worsening economic conditions, the central bank is likely to soon cut its growth estimate further and to trim its policy rate as well after a quarter percentage point cut to 1.5 percent last month.

Chang Jae-chul, chief economist at KB Securities, noted the trade dispute between South Korea and Japan may continue to intensify for some time, further driving down the value of the won.

“The South Korea-Japan trade conflict will likely intensify instead of being patched,” Chang said.

The economist said the won-dollar exchange rate may drop to as low as 1,250 won to the dollar without active intervention.

“The won-dollar exchange rate is projected to drop to 1,220 won on the South Korea-Japan trade dispute alone when all other conditions remain unchanged,” Chang said.

“However, the exchange rate is expected to remain at around 1,200 won as the local authorities are expected to take active steps to stabilize the market,” he added.

Lee too expected a possible market intervention by local authorities but insisted that alone might not be enough to turn the side.

“Should the won continue to lose further ground, the local authorities will have no choice but to intervene as that (additional weakening of the won) alone may lead to market fears,” Lee said.

Already, investors may be rushing to what are considered safer assets.