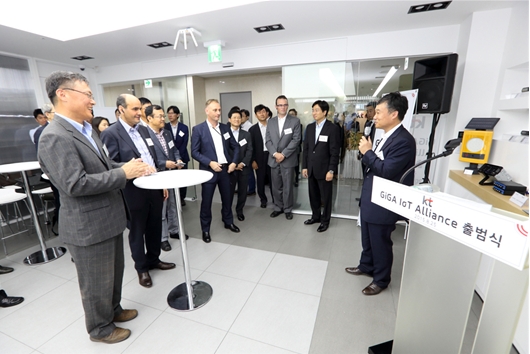 The GiGA IoT Alliance, Korea’s largest IoT consortium, is composed of approximately 100 partner companies in the IoT sector, including Samsung Electronics, Nokia and China Mobile. In addition, the Ministry of Science, ICT and Future Planning and Gyeonggi Creative Economy Innovation Center are linked to the alliance.

Any developers and firms with innovative ideas related to IoT can join the alliance and use its R&D facilities, including the GiGA IoT Business Partner Center and the KT-Nokia IoT Lab. For the alliance, the Gyeonggi Province will open its Creative Economy Innovation Center in Pangyo, help develop commercial services and even offer financial support.

Some 20 IoT experts will be employed at the center to offer consulting services to developers dreaming of IoT businesses.

Meanwhile, partner companies can freely use the “IoT Makers” software platform, which enables developers to add or set up more features in their products by using various sensors with computers while monitoring the results of each combination.

In addition, to save time and money in the development of new products, and to revitalize the IoT ecology, KT will link IoT Makers with Samsung’s ARTIK IoT software and hardware platform. On its GiGA IoT Portal (gigaiot.olleh.com), developers can share information related to developing IoT products.

The alliance plans to develop more than 100 successful products by 2016 in the smart vehicle and smart energy sectors, as well as the home IoT sector.