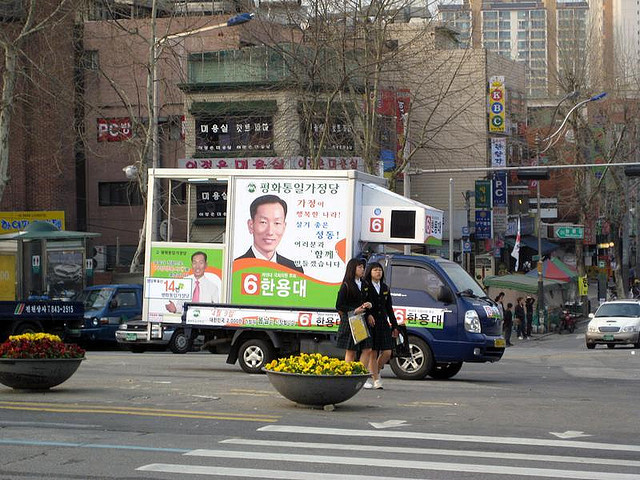 The service supports live broadcasting of election campaigns so that the voters can watch political campaigns at anytime and anywhere. (image: Michael-kay Park/flickr)

The service supports live broadcasting of election campaigns so that the voters can watch political campaigns at anytime and anywhere. Especially, as opposed to previous platforms, which used satellites to interlink between the campaign vehicles, the KT’s new broadcasting system implemented “LTE interlocking method” to carry out the job.

This means that the campaigns can be viewed in real time with any Internet-based devices such as smartphones, smart pads, smart TVs and computers, as well as from the vehicle, whereas the live video could only be broadcast from the satellite platform-installed vehicle in the past.

The new platform can save up to 96 percent of communication cost for candidates with more than two campaign vehicles, which allows the candidates to be more effective in their campaign effort.

Moreover, the live campaign footages can be shared through an official website of the candidate, mobile messenger, and social network channels such as blogs, which enable the prospective candidates to advocate their agendas and election promises to as many voters as possible, given a short 13-day long campaign period.

The service also allows constituents to participate in the election more actively and conveniently as they now could check out the candidates regardless of time and place, through smart devices and computers on exclusive channel provided by U stream.

A marketing director in U stream Korea said, “The election campaign is now transformed. Campaign strategies must also change accordingly to encompass the smartphone generation. With our infrastructure for live broadcasting and unique campaign video-making services, we can help candidates carry out ‘smart election campaign.’”

A director in KT said, “Texts and images have done the job in the past elections. However, starting from the upcoming local elections, ‘video media strategy’ will be the new election norm with our “ICS live broadcasting platform.”