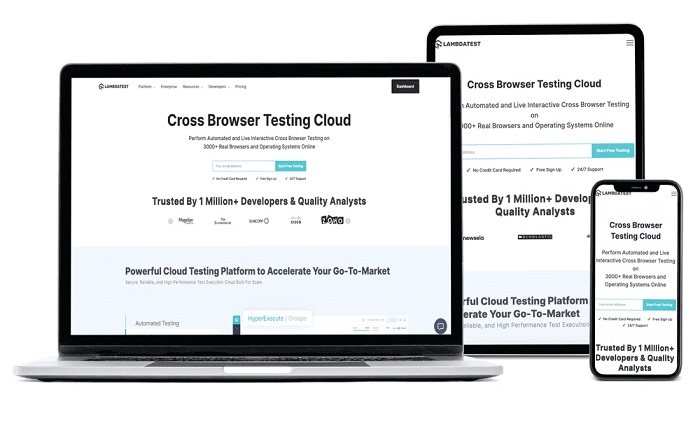 Dashlane was initially running its end-to-end tests using an in-house testing infrastructure setup, however, maintaining the same was hard as it consumed a lot of the engineering bandwidth. The team had developed a pipeline where they ran smoke tests for every commit, regression tests for every merge to master, and then multi-browser tests during nightly runs. They wanted to introduce the UI tests to be run along with the development roadmap.

With their rapid growth, Dashlane was looking to shift-left the testing to meet the growing customer demands which warranted constant addition and updating of features. The company wanted to eliminate constant developer interrupts and rapidly increase its release velocity.

With this goal in mind, Dashlane, being an agile mindset-driven company, was looking for a continuous testing platform that could not only help with the right test infrastructure but also bring in the necessary orchestration to do the heavy lifting in the testing, thereby enabling its team to focus on other important tasks.

After extensive benchmarking against their local infrastructure and other cloud-based alternatives, Dashlane decided to go ahead with LambdaTest’s HyperExecute.

HyperExecute cut down Dashlane’s test execution time by half and completely eliminated flaky tests. Also, HyperExecute’s dashboard collected all the test data in one place, ensuring that the team didn’t have to spend hours getting test data and logs from different sources. The prompt and reliable customer support was available to help at crucial junctures thereby enabling a smooth transition. Thus, HyperExecute’s smart test orchestration enabled Dashlane to meet all of its testing KPIs and ensured quick release velocity due to reduced developer friction.

“When companies have a dire need to deliver features at a record pace due to customer demands, standard cloud-based test execution platforms are sadly not up to the mark. The goal of HyperExecute is to enable companies to release faster by ensuring quicker feedback to developers. When Dashlane came to us with their problem statement, HyperExecute was just the right fit. It met all their requirements and some more,” said Jay Singh, co-founder, LambdaTest. “While the speed of test execution was the highlight, the smart test orchestration features gave the team more flexibility and control on the test execution environment. Dashlane no longer does mere test execution, they now do test orchestration and we are glad to be their platform of choice.”

LambdaTest’s HyperExecute helps customers run and orchestrate tests in the cloud for any framework and programming language at blazing-fast speeds to cut down on quality test time, helping developers build software faster.

“At Dashlane, we were looking for a test orchestration platform that could help us increase velocity and eliminate developer friction and interruptions. After a significant amount of benchmarking, we decided to go ahead with LambdaTest’s HyperExecute. HyperExecute outperformed our in-house setup as well as the alternatives we had put to test. We evaluated the tools on multiple parameters and found that HyperExecute ran our tests at 2X speed and that we had drastically reduced the amount of flaky tests thanks to their sanitized infrastructure. Another great benefit was their prompt and reliable customer support,” said Giovanna Faso, VP, Engineering Operations, Dashlane. “They also offer some smart features like real-time log streaming, feature-packed hosted runners, an insightful dashboard, and matrix-based multiplexing which really wowed us. I’d recommend HyperExecute by LambdaTest to any business that is looking to improve their developer experience and increase the value they get from automated testing.”

LambdaTest is a continuous quality testing cloud platform that helps developers and testers ship code faster. Over 10,000+ customers, and 1 million+ users across 130+ countries rely on LambdaTest for their testing needs.

● HyperExecute helps customers run and orchestrate tests in the cloud for any platform and programming language at blazing-fast speeds to cut down on quality test time, helping developers build software faster.

Dashlane’s mission is to make security simple for millions of organizations and their people. Dashlane empowers businesses of every size to protect company and employee data while helping everyone easily log in to the accounts they need—anytime, anywhere. Over 15 million users and 20,000 businesses in 180 countries use Dashlane for a faster, simpler, and more secure internet.