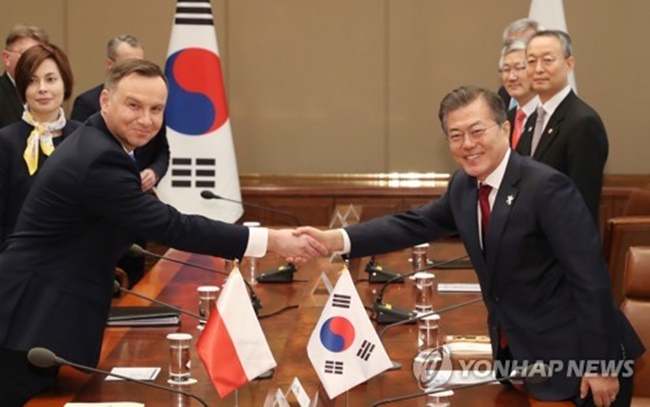 South Korean President Moon Jae-in (R) shakes hands with his Polish counterpart Andrzej Duda before the start of their bilateral summit at his office Cheong Wa Dae in Seoul on Feb. 8, 2018. (Image: Yonhap)

In their bilateral summit, held at Seoul’s presidential office Cheong Wa Dae, the heads of state noted the countries’ relationship and cooperation have steadily improved since they upgraded their ties to a strategic partnership in 2013.

They “particularly noted active cooperation in the defense sector and future industries, such as electric car batteries, and expressed hope that more South Korean firms will invest in Poland and that they will further strengthen their practical cooperation in areas such as infrastructure and energy in the future,” the South Korean presidential office said in a press release.

Moon expressed gratitude for Poland’s support for peace and stability on the Korean Peninsula, noting the European country had also issued a statement welcoming the resumption of inter-Korean dialogue last month to discuss North Korea’s participation in the Winter Olympic Games.

Duda arrived here this week for the opening ceremony of the Winter Olympics, which will be held from Friday in the eastern town of Pyeongchang, located some 180 kilometers from Seoul. Poland also sits on the Neutral Nations Supervisory Commission that oversees the Korean armistice, which ended the 1950-53 Korean War.

“President Moon asked for Poland’s continued support so the mood for dialogue and reconciliation between the South and the North will continue until after the end of the Olympics and develop into dialogue on peaceful resolution of the North Korean nuclear issue,” Cheong Wa Dae said.