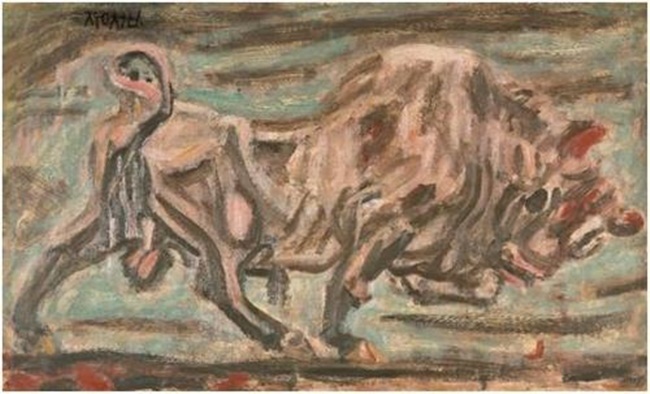 Lee Sung-seob’s “A Bull” is shown in this image provided by Seoul Auction. (Image: Yonhap)

The fierce bull painting by one of the country’s most celebrated artists changed hands at the art event held at the auction house’s headquarters in Pyeongchang-dong, Seoul.

The painting is believed to describe a bull in a fight and has the artist’s signature in the top left of the canvas. The exact year of its creation is unknown.

The price surpassed the artist’s previous auction record of 3.56 billion won, set by another bull painting at a 2010 auction by the same company.

A pioneer of Korean modern art, Lee is most famous for his dynamic bull oil painting series that use bold and rough brushstrokes to capture the animal’s lively movement and its intense yet sad eyes in what critics say is the expression of longing for his Japanese wife and two sons.

“Lee’s nine bull paintings are mostly housed in museums so it is very rare for one of them to be out in the market. I think that affected the price,” the company’s marketing director Chey Youn-seok said.

Meanwhile, abstract art master Kim Whan-ki holds the record for the most expensive Korean art ever sold at an auction. In April last year, “Tranquility 5-IV-73 #310″ fetched 6.55 billion won during an event by K Auction, shattering his own previous record. The country’s five most expensive art pieces all belong to Kim.

Lee beat Park Su-geun, whose “Washing Place,” with a price tag of 4.52 billion, had been the sixth most expensive artwork after Kim’s paintings.