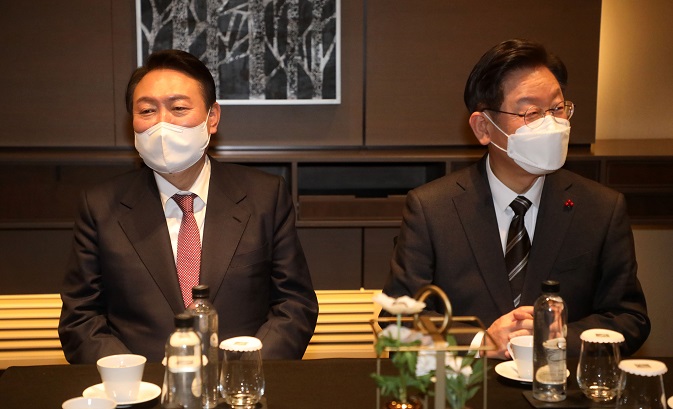 In this file photo, Lee Jae-myung (R), the presidential nominee of the Democratic Party, is seated next to Yoon Suk-yeol, the candidate of the People Power Party, at an event on balanced national growth at a Seoul hotel on Dec. 28, 2021. (Pool photo) (Yonhap)

Lee of the liberal ruling Democratic Party and Yoon of the conservative People Power Party detailed their plans for dealing with North Korea’s nuclear weapons program in written interviews with the Korean-American Club, a group of former and current South Korean correspondents to the U.S.

The interviews were conducted early this month and published in the club’s quarterly magazine Monday.

“The best solution is conditional sanctions relief and phased simultaneous action,” Lee said, referring to the use of a snapback mechanism under which sanctions would be restored in the event North Korea fails to live up to its denuclearization obligations.

If North Korea takes denuclearization steps, there would be “corresponding sanctions relief measures in phases and simultaneously,” he said.

Lee objected to the idea of South Korea going nuclear or reintroducing tactical nuclear weapons or entering into a NATO-like nuclear-sharing arrangement, saying such notions are “unrealistic, irresponsible and dangerous.”

He said the extended deterrence provided by the South Korea-U.S. alliance is enough to deter North Korea’s nuclear threats.

He also promised to meet with U.S. President Joe Biden and North Korean leader Kim Jong-un early in his term if elected.

Meanwhile, Yoon shared in Lee’s opposition to South Korea’s nuclear armament or a nuclear-sharing arrangement between South Korea and the U.S., saying the North could use them as pretexts to justify its own possession of nuclear weapons and turn denuclearization negotiations into nuclear disarmament talks.

But Yoon emphasized the importance of enhancing cooperation with the U.S. and the international community to deal with the North Korean threat.

“I will pursue ways to significantly strengthen the extended deterrence provided by the United States through close strategic talks between South Korea and the U.S.,” he said.

Yoon also said it is “important to thoroughly implement sanctions on North Korea in conjunction with the international community.”