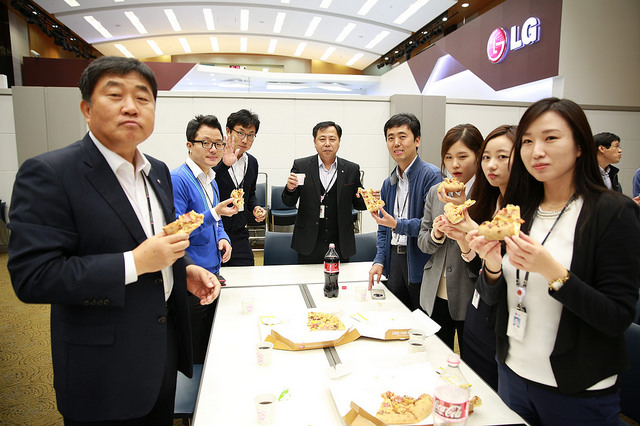 SEOUL, Nov. 19 (Korea Bizwire) – Koo Bon-joon, vice-chairperson and CEO of LG Electronics, has been delivering pizzas to his employees for more than three years to cheer them up. So far, it is reported that he has sent pizzas to 55,000 LG workers.

Koo’s pizza deliveries trace back to 2011 when he sent 80 pies to LG’s smartphone development team. At the time, the team was shrinking due to disappointing sales results and Koo wanted to encourage them by treating them to pizza.

Since then, he has taken on the nickname of “Pizza CEO.” His latest pizza delivery went to researchers who developed LG’s first in-house application processor, NUCLUN, embedded in the G3 Screen smartphone launched last month.

As well as the pies themselves, the pizza boxes contain a message from Koo that reads, “I appreciate your sincere efforts for the company. Your contribution will be a robust stepping stone for the future of LG Electronics.”

Koo’s pizza delivery is not limited to his workers in Korea. He has sent pizzas to employees in overseas corporations and approximately 80 branches all over the world, including Egypt, India, Nigeria and the Philippines.

LG workers who have benefited from the deliveries responded that they could feel Koo’s consideration in caring for workers across the globe.

An official at LG Electronics said, “Koo’s Pizza CEO events have had a positive effect in boosting workers’ morale. His pizza delivery will continue.”