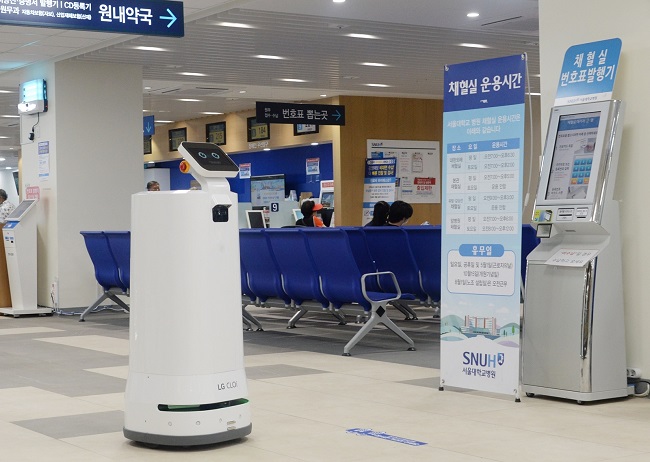 This photo provided by LG Electronics Inc. on July 8, 2020, shows the company’s CLOi ServeBot at Seoul National Hospital in Seoul.

The South Korean tech giant said the CLOi ServeBot comes in two models — drawer type and shelf type, depending on its design. The company did not disclose the price of the bot.

LG said its drawer-type CLOi ServeBot has been deployed to Seoul National Hospital in Seoul, adding that it marks the first use of a domestically produced commercial service robot at a local hospital.

The bot’s main job will be delivering various medical items and drugs, it added. The 130-centimeter tall robot can carry up to 15 kilograms.

LG said its bot is powered by an autonomous driving technology and can be programmed to transport items to multiple destinations in order. The bot can also detect and avoid obstacles on its way.

LG said it has been testing its bot at Incheon International Airport since 2017 to verify its autonomous driving and obstacle avoidance solutions.

The company said the use of robots will increase as the coronavirus pandemic led to non face-to-face services.

In recent years, LG has been focusing on bolstering its robotics business, acquiring bot manufacturing and developing firms. In January, the company opened a robotics lab in Boston.