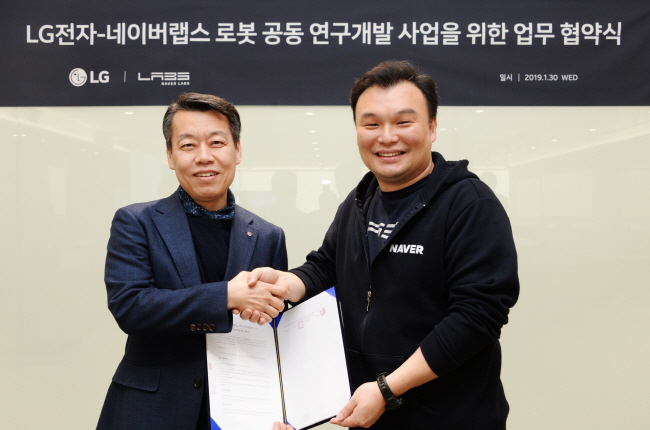 LG Electronics and Naver’s R&D subsidiary signed a memorandum of understanding (MOU) to collaborate on research and development of robot technology, expanding on their discussions made during the recent Consumer Electronics Show in Las Vegas.

The xDM platform is an advanced mobility technology that can be used in both indoor and outdoor settings and accurately analyzes location data in real time.

“Based on LG Electronics’ know-how in artificial intelligence (AI) and autonomous driving, we will combine Naver’s software platform in our robots to provide differentiated value for our customers,” Roh Jin-seo, the head of the robotics business at LG Electronics, said during the signing ceremony at Naver Labs in Seongnam, south of Seoul.

Naver debuted its artificial intelligence and other robotic technologies during this year’s CES, drawing attention from industry officials around the globe.

Naver Labs Corp., a R&D subsidiary of Naver, has integrated AI, mobility, robotics and other technologies for the development of so-called Ambient Intelligence, with an aim of improving people’s lives.

Ambient Intelligence products include AMBIDEX, a robotic arm that uses a cable-driven mechanism to make interactions with humans safer.

Other robotic technology includes Around G, an autonomous guide robot that provides guidance in large indoor spaces, such as shopping malls and airports.