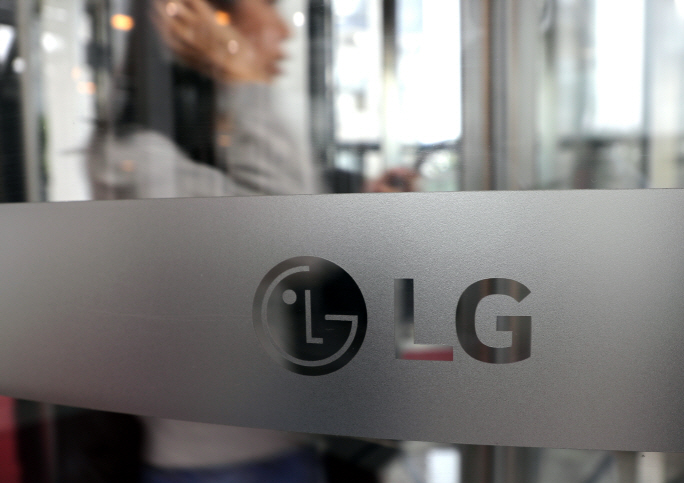 A pedestrian passes by the lobby of LG Electronics Co.’s office in Yeouido, western Seoul, on Oct. 5, 2018. (Yonhap)

The South Korean electronics maker said it posted 578 billion won (US$495 million) in net profit in the January-March period, compared with 730 billion won a year earlier.

Its sales fell 1.4 percent on-year to 14.9 trillion won, and operating profit slipped 18.7 percent to 901 billion won in the first three months of this year, the firm said in a regulatory filing.

“Upbeat sales of the premium lineup and new home appliances led to record high quarterly earnings in the home appliance and air solution division,” LG said in a release.

Its home entertainment division booked 346.5 billion won in operating profit, which marks a 2.9 percent on-year fall due to a high base effect from last year.

LG expected global demand for TVs to slightly decline in 2019 from a year ago but pinned hope on expanded sales of its premium lineup, such as OLED products and ultra-large screens.

Its mobile business, however, logged 203.5 billion won in operating loss amid the flattening smartphone demand in the global market, marking the eighth consecutive quarterly deficit.

Last month, LG released its new flagship smartphone, the G8 ThinQ, which drew a lukewarm market response in the global market. The company had planned to introduce V50 ThinQ, its first 5G smartphone with a detachable second screen, this month but delayed the schedule to better prepare for the new wireless standard.

LG said it will launch the 5G smartphone within the second quarter to gain new growth momentum while continuing cost-cutting efforts to enhance profitability.

“The global market demand is expected to remain stagnant in the second quarter despite the launch of 5G smartphones in North America and South Korea, and new models,” LG said. “The price competition is also expected to intensify.”

The money-losing smartphone business forced the company to shift its business strategy to improve profitability.

Last week, LG said it will stop producing smartphones in South Korea by the end of this year and move its production line to Vietnam to cut costs.

LG Electronics, once one of the world’s top three smartphone makers, has struggled in the global market for years as it has been sandwiched between local rival Samsung Electronics Co. and Apple Inc. in the high-end market and Chinese manufacturers in the lower-end segment.

When the company relocation is completed later this year, the Vietnamese factory will have a smartphone production lineup with an annual capacity of 11 million, the company said.

Shares of LG Electronics slipped 0.13 percent on the Seoul bourse to 75,800 won. The earnings report was released shortly before the market closing.