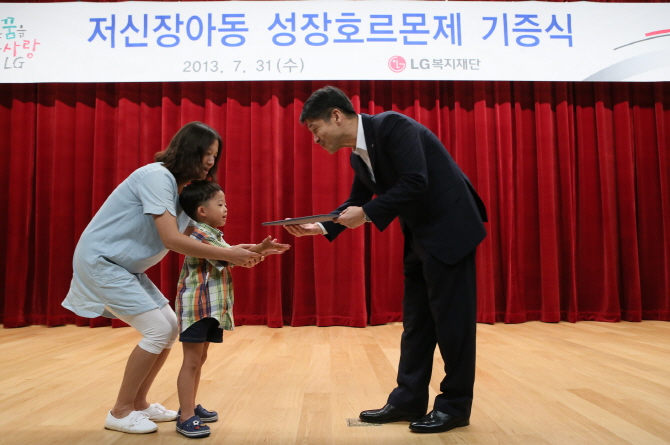 Many children are suffering from short stature caused by growth hormone deficiency and the LG Foundation has brought them hope by supporting them with free administration of growth hormones. (image credit: LG foundation)

Seoul, Korea, August 01 (Korea Bizwire) – Many children are suffering from short stature caused by growth hormone deficiency and the LG Foundation has brought them hope by supporting them with free administration of growth hormones. The foundation held this year’s donation ceremony at the LG Twin Towers on July 31. This year’s program will be offering 133 children with approximately 1 billion worth of ‘Eutropin,’ a growth hormone developed by one of LG’s subsidiaries.

The program selects children from low-income families suffering from the symptom based on recommendations of doctors and offers them a free supply of Eutropin for a year. Children who are likely to grow further are offered an additional year.

Normally, children with short stature are defined as those growing less than 4 cm a year. But children that have benefited from this program have been known to grow an average of 8 cm per year. Eutropin was first developed by LG Life Sciences in 1992, and it has been donating more than 1% of sales of ‘Eutropin’ to the LG Foundation. First initiated in 1995, the foundation has handed out more than 58 billion won worth of Eutropin to 845 children over the past 19 years, and is one of the foundation’s most notable charity programs.

At the ceremony Cho Jun-ho, co-president of LG Corp. said, “The LG Foundation has continued our philanthropic work with the pride that we have been able to bring hope and joy to these children and their families. Eutropin, which will not only help the children grow physically but also mentally, is not just a medicine but our heartfelt gift prepared for them.”