SEOUL, Oct. 24 (Korea Bizwire) – LG Group is set to build a large-scale science park in the Magok Industrial Park in the southwest of Seoul by holding on October 23 a groundbreaking ceremony at the site. 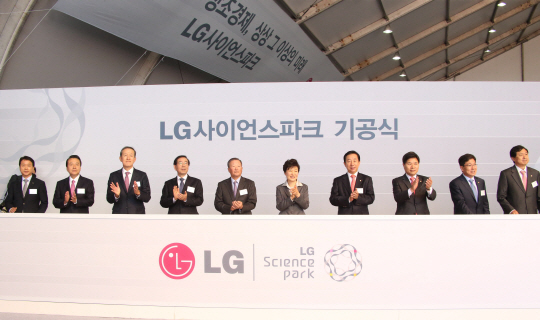 Mr. Koo, the LG Group chairman, said in celebratory remarks, “In order for us to lead the market, we need to create value by combining different technologies and industrial areas in addition to developing novel technologies. That’s why we need to put scientists and technologists under one roof and let them work out innovative ideas. The science park in which we will invest up to 4 trillion won until 2020 will be the nation’s largest fusion tech R&D center in the areas of electronics, chemical, communications, energy, and biotech.”

Once the science park project is completed by 2020, it will have hosted a total of 25,000 research staff from affiliate companies such as LG Electronics, LG Display, LG Innotek, LG Household & Health Care, LG Life Sciences, LG Uplus, and LG CNS.