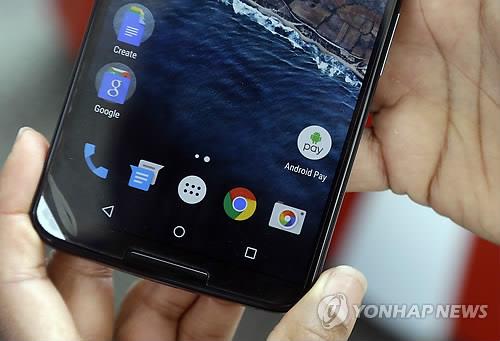 A Google employee introduces the Android Pay application in this file photo taken on May 28, 2015, in the United States. South Korea’s No. 2 tech giant LG Electronics Inc. is set to join forces with U.S. Google Inc. to roll out a smartphone with the Android-based payment system, industry sources said on Aug. 6. (image: Yonhap)

SEOUL, Aug. 6 (Korea Bizwire) — South Korea’s No. 2 tech giant LG Electronics is set to join forces with U.S. Google for a smartphone with an Android-based payment system, industry sources said Thursday, commencing its struggle to catch up to rivals.

LG Electronics is anticipated to showcase Google’s next Nexus smartphone in October, according to the sources. While a new Nexus model comes with the latest version of the Android operating system, the upcoming edition is widely expected to come with Android Pay, a mobile payment system.

Google has released six Nexus smartphones so far, joining hands with not only LG but other players, including Samsung Electronics and Taiwan-based HTC, as well.

With Huawei of China also being tapped as a producer of the upcoming Nexus smartphone, industry watchers anticipate LG and Huawei to produce 5-inch and 5.7-inch Nexus smartphones, respectively.

Over the recent months, the mobile payment platform has been one of the most heated segments among global tech giants.

Apple kicked off its service in October last year, which is available in the North American and European markets. It is set to reach the Chinese market this year.

The Samsung Pay service, which is currently on a pilot run, is also expected to be officially available starting this month, presumably around the release of Samsung’s next phablet, a cross between a smartphone and a PC, scheduled for next week.

On the back of the strong market presence of the Android platform, Google is expected to rise as a strong threat to existing service providers.

The MST technology is significant as it is compatible with conventional credit card devices, which means it can be used in a wider number of shops compared with Apple Pay.