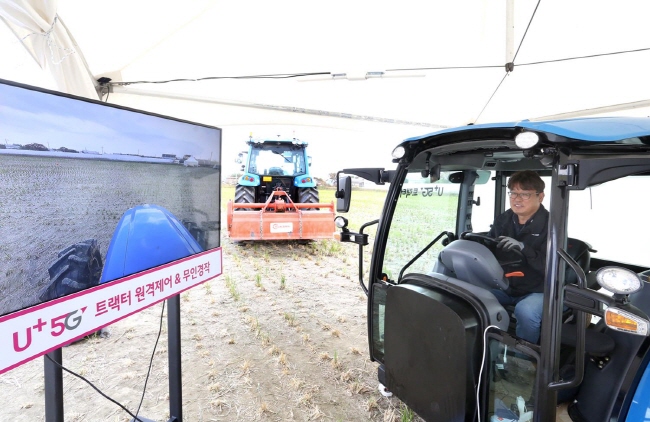 LG Uplus Corp. demonstrates smart farming based on its 5G mobile network at a farm in Ilsan, north of Seoul, on Oct. 29, 2019. (image: LG Uplus)

Net profit stood at 104.5 billion won (US$89.5 million) in the July-September period, compared with 153.8 billion won a year ago, LG Uplus said in a regulatory filing.

LG Uplus said its profits decreased, despite solid sales, due to increased marketing costs and continued investment for 5G networks that rolled out in early April.

The company’s marketing spending soared 17.5 percent on-year to 586.1 billion won in the third quarter, as it carried out aggressive campaigns for 5G service.

Its capital spending skyrocketed 169.4 percent to 784.4 billion won over the period in line with the construction of 5G base stations.

LG Uplus said revenue from its mainstay mobile business gained 3.5 percent to 1.4 trillion won in the third quarter, thanks to an increased number of 5G subscribers.

The company said it had about 875,000 5G users as of September, which accounted for 5.9 percent of its total mobile subscribers.

The number of its IPTV subscribers jumped 11.5 percent on-year to 4.4 million in the third quarter, and that of high-speed internet users grew 5.4 percent to 4.2 million, it noted.

LG Uplus said it will speed up building 5G base stations across the nation to improve the quality of the network and boost premium service users, and that it will create new revenue streams with various services for enterprise users, including connected cars and smart factories.

The company said it expects to have about 1.5 million 5G users by year-end, about 10 percent of the total mobile subscribers.

“If Apple launches 5G smartphones and the network quality improves next year, the number of 5G users could rise to 30 percent of the total by the end of 2020,” Lee Hyuk-joo, the firm’s chief financial officer, said during a conference call.

The company said the capital expenditure for 2020 will be similar to this year as it plans to expand 5G coverage beyond the Seoul metropolitan area.

Shares of LG Uplus fell 1.86 percent to 13,200 won on the Seoul bourse, hovering below KOSPI’s 0.8 percent gain. The earnings report was released before the market closure.