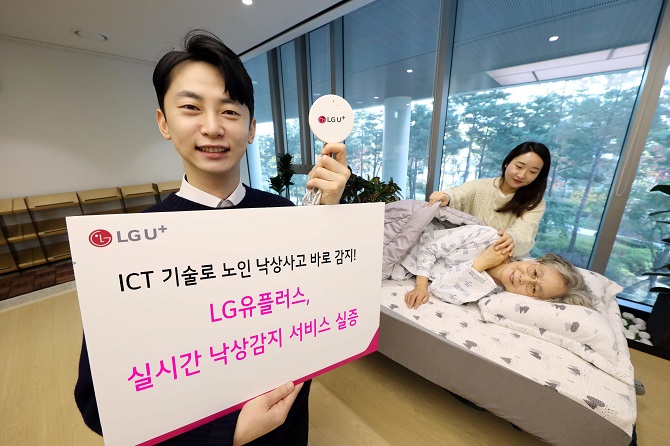 The service uses a special radar sensor that is installed indoors to monitor the motion of the person inside on a real-time basis. (image: LG Uplus)

SEOUL, Nov. 4 (Korea Bizwire) – LG Uplus Corp., South Korea’s No. 3 mobile carrier, announced on Tuesday that it plans to launch testing of a real-time elderly fall detection service using radar sensors, with an aim of commercializing the service by next year.

The service uses a special radar sensor that is installed indoors to monitor the motion of the person inside on a real-time basis.

If any situation occurs where falls are suspected, the device instantly sends a wireless signal to family members or guardians.

Thus far, wearable devices or contact-based sensors have usually been used to offer this type of service.

Such methods, however, are inconvenient to use and the batteries must be replaced on a regular basis.

In contrast, the newly-developed service addressed such issues by using non-contact radar technology.

Compared to video monitoring methods, the radar sensors are free from environmental restrictions such as night and humidity. Another strength is that radar does not infringe on the privacy of users.

Prior to commercialization, LG Uplus plans to test the service in collaboration with the H Plus Yangji Hospital as a way to improve the useability and accuracy of the service.