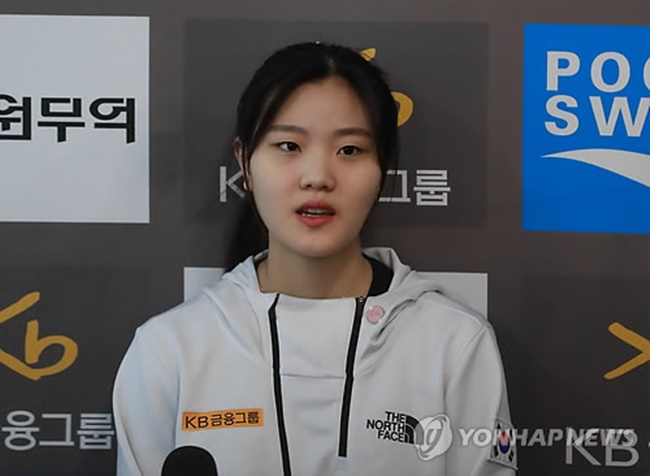 Training with her teammates on the ice is one thing, but living inside Gangneung Olympic Village, one of two athletes’ villages for PyeongChang 2018, among other Olympians has been a new experience altogether.

Lee isn’t just a kid in the candy store. How about a kid in a video game?

“We all live in this apartment building, and it feels so surreal that I feel like being inside a video game,” Lee said after her practice at Gangneung Ice Arena on Wednesday. “Whenever I walk around the village, it hits me that I’ve made it to the Olympics.”

Lee will only participate in the 3,000-meter relay. South Korea has been the top relay nation so far this season, and at the Olympic Games, it has grabbed five of seven relay gold medals.

“I want to be perfectly ready for the relay,” Lee said. “We’ll have to watch out for every team in the relay, but especially the ones that make the finals every time.”

Though she’s the youngest member of the team, Lee said she doesn’t shy away from speaking her mind during team meetings.

“I tell my older teammates what I think about certain things and they respond as necessary,” she said. “We talk to each other quite a bit.”

On the current team, Shim Suk-hee and Kim A-lang are returnees from Sochi 2014. Lee said the veterans have offered advice on what to expect at the Olympic Games.

“They told me about how to handle crowd noise during the Olympic races and how to deal with our emotions,” Lee said. “They said a lot can happen at the Olympics. And most of what they told me, I haven’t heard from anyone else before.”