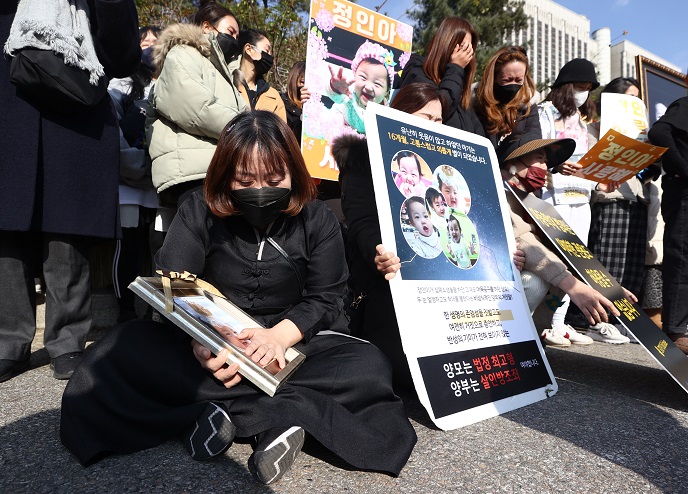 Activists erupt in tears during a picketing campaign in front of the Seoul High Court in southern Seoul on Nov. 26, 2021, after the court commuted a life sentence for the adoptive mother of Jung-in, a toddler abused to death the previous year. (Yonhap)

SEOUL, Nov. 26 (Korea Bizwire) — An appellate court on Friday commuted a life sentence to 35 years in prison for a woman charged with abusing her adopted toddler to death last year in one of the country’s most ghastly child abuse cases in recent years.

The Seoul High Court convicted the adoptive mother, surnamed Jang, of abusing her then 16-month-old daughter Jung-in to death last year but lowered her sentence, saying it is difficult to say there are enough objective facts warranting life imprisonment.

“There are no circumstantial indications that the accused thoroughly or systematically premeditated the crime,” the court said, adding the murder may be attributable to her psychological inability to control mental stress.

The court, meanwhile, upheld the lower court’s five-year prison term for her husband, surnamed Ahn, who was indicted on child abuse charges for aiding and abetting Jang’s violence toward the adopted baby.

The court also retained the previous court orders requiring the couple to receive 200 hours of child abuse treatment programs and banning them from working at children-related institutes for 10 years.

The toddler was adopted in February and died in October last year of severe abdominal injuries and internal bleeding that were caused by “strong external force,” according to an official autopsy.

Jung-in had been habitually beaten for the five months prior to her tragic death, and fractured bones and bruises were found on her body, investigations showed.

Jang was initially indicted on lesser charges of child abuse resulting in death. But prosecutors later added a murder charge, based on forensic results, and had sought the capital punishment for the adoptive mother.

She admitted to having abused the child but claimed the death was an accident. She and the prosecutors both appealed the first ruling.

The case caused nationwide grief and anger over child abuse. Throngs of people sent petitions to the court and held picketing campaigns to demand justice.

The National Assembly later revised the anti-child abuse law, calling for a murder charge against those who “intentionally” abuse children to death. Under the revised law, homicide by child abuse is punishable by death.