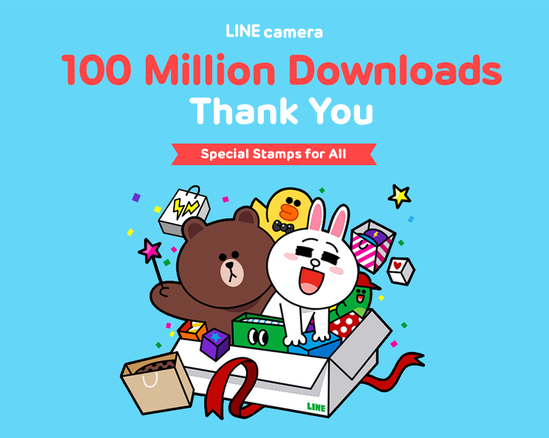 LINE camera is LINE’s official camera app, and provides users with the functionality to easily edit and decorate photos saved on their smartphone or taken with the app and share them with their friends and groups on LINE or other social networking services, including Facebook and Twitter.

After the launch of the LINE camera service in April 2012, it received high acclaim by offering more decorative items than any other camera app, with over 17,000 stamps that include the popular LINE characters, over 800 frames and over 100 fonts, and more, in addition to its comprehensive photography toolkit with features such as Timer Shot, Touch Shot, and Grid View. Just 17 months after the release of the app, the global number of downloads surpassed 50 million in September 2013.

Since reaching that milestone, the number of stamps, frames, filters, and other decorative items has continued to grow, bringing with it a steady stream of new content and features, including the Beauty feature, which provides simple-to-use touch up tools; the Collage feature, which provides an easy way to lay out multiple photos together; and the Frame Shop, which sells a wide assortment of frames featuring popular characters and artists.

The robustness of the app has resulted in user growth not only in countries with high LINE user numbers like Japan, Taiwan, Thailand, but also in other regions such as India, Indonesia, Korea, and the United States, doubling the total download number and bringing it to over 100 million on September 22, just under one year since achieving the 50 million download milestone in September 2013. The app has also reached the top popularity ranking in the photography category of both Google Play and the App Store in 61 countries and regions.

In celebration of reaching over 100 million downloads, from September 22 until December 31, users will be able to download a free set of celebratory stamps in the app.

LINE camera will continue to expand and improve the features and content it offers to make communication even more exciting in the future.