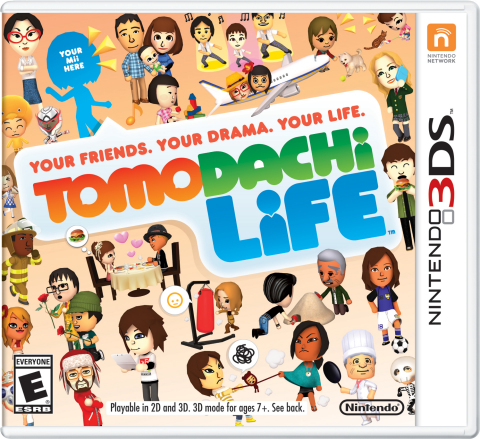 REDMOND, Wash. April, 10, 2014 (Korea Bizwire)–Take all your preconceived notions about life’s possibilities, crumple  them into a ball and toss them out the window. It’s time to star in a  whole new life. On June 6,visit the outrageously bizarre  island world of Tomodachi  Life for the Nintendo  3DS system.

Everyone you know, and everyone you wish you knew,  should prepare to meet their Mii maker – you! – as you build a bustling  fantasy population of friends, family and even celebrities, all in one  wild and hilarious world. The real emotional connection you already  share with your Mii characters will keep you glued to the drama,  intrigue and hilarity that ensues as everyone goes about their  extraordinary daily lives, evolving and interacting in unpredictable and  often uproarious ways.

“Nintendo fans are familiar with Mii characters, but now they come to  life in ways they never have before – with their own lives, interests  and personalities,” said Scott Moffitt, Nintendo of America’s executive  vice president of Sales & Marketing.

“Customization and open-ended play  are two big video game trends for 2014, and Tomodachi Life  delivers a fun, creative experience that makes you want to visit again  and again, because there’s always something interesting going on.”

“Tomodachi” is the Japanese word for “friend.” After completely  customizing all your Mii characters, from their voices and appearances  right down to their personality quirks, you’ll recognize them instantly.  But you can’t possibly predict what they’ll do next. For the first time  ever, Mii characters behave based on the personality traits you select,  playing out the drama you set in motion.

A celebrity might fall in love  with your math teacher. Your mom might jump on stage to belt out heavy  metal songs. Or you could become famous striking poses down the runway  of a fashion show wearing cute and silly outfits. Best of all, you can  document these unbelievable moments for posterity and share them all  with your friends via the Nintendo 3DS Image Share service.

Even your far-fetched celebrity dreams can come true in Tomodachi Life.  If you have ever wanted international superstar Christina Aguilera to  join you in a sing-off, or believed that she would become BFFs  with your cousin or wished she would perform a song with your customized  lyrics, it could happen here.

The multi award-winning singer has signed  on to be a part of Nintendo’s promotional campaign for the game, and her  Mii character will be available at launch. Aguilera’s Mii character also  will guest star in a TV commercial and in online videos that show all  the exciting things that happen when celebrities mingle with Miis  players know personally. The first video in the series can be viewed  here: http://youtu.be/sBTHSY5GKKY.  Additional celebrities involved with Tomodachi Life will be  announced over the upcoming weeks.

The plot of Tomodachi Life thickens with the addition of each Mii  character. As they deliver one gripping twist and turn after another,  you can reward them with in-game gifts and clothes, their favorite foods  or special flourishes for their apartments. Together you can further  broaden your Tomodachi Life horizons by exploring the island,  solving characters’ problems and helping them with their needs.

Remember that Nintendo 3DS features parental controls that let adults  manage the content their children can access. For more information about  this and other features, visit http://www.nintendo.com/3ds.

About Nintendo: The worldwide pioneer in the creation of  interactive entertainment, Nintendo Co., Ltd., of Kyoto, Japan,  manufactures and markets hardware and software for its Wii U™  and Wii™ home consoles, and Nintendo 3DS™ and  Nintendo DS™ families of portable systems. Since 1983, when  it launched the Nintendo Entertainment System™, Nintendo has  sold more than 4.2 billion video games and more than 669 million  hardware units globally, including the current-generation Wii U,  Nintendo 3DS and Nintendo 3DS XL, as well as the Game Boy™,  Game Boy Advance, Nintendo DS, Nintendo DSi™ and Nintendo DSi  XL™, Super NES™, Nintendo 64™, Nintendo  GameCube™ and Wii systems. It has also created industry icons  that have become well-known, household names such as Mario™,  Donkey Kong™, Metroid™, Zelda™ and  Pokémon™. A wholly owned subsidiary, Nintendo of America  Inc., based in Redmond, Wash., serves as headquarters for Nintendo’s  operations in the Western Hemisphere. For more information about  Nintendo, please visit the company’s website at http://www.nintendo.com.