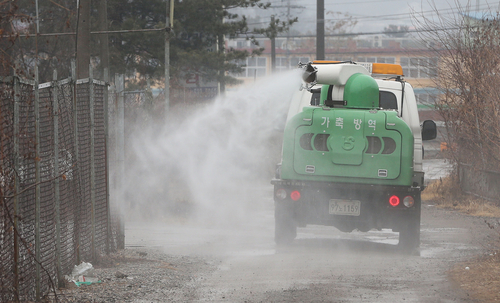 Local farmers are asking for the withdrawal of factory farms run by large companies, as they have been identified as the starting place of the livestock epidemic. (image: Yonhap)

According to officials from Jeungpyeong and Jincheon counties in North Chucheong Province, local farmers are asking for the withdrawal of factory farms run by large companies, as they have been identified as the starting place of the livestock epidemic.

Recently, a gathering of village foremen in Jeungpyeong county placed placards around the villages, asking for the closure of a factory farm owned by a large livestock company, where the foot-and-mouth disease broke out in December last year. To stop the disease, the farm had to euthanize some 2,400 pigs. Currently, it has a population of around 15,000 pigs.

A representative of the farmers’ group said, “Due to the factory farm, villagers have had to endure foul smells from the pigs. It is not reasonable to euthanize the pigs with tax money paid by villagers, even though the disease broke out from the company’s failure to maintain proper sanitation.”

“The farm was also the starting place of the disease four years ago. Now it should pay for it,” he added.

Another factory farm run by the same livestock company was the source of the epidemic earlier in December for the first time in the province. The farm, which has a population of around 20,000 pigs, provides baby pigs to Jincheon County and nearby Gyeonggi province.

As the foot-and-mouth disease is spreading through the county after the outbreak at the farm, Jincheon villagers are pointing to the farm as the source of the epidemic.

The villagers visited the county office to complain about persistent odors emanating from the farm, and asked authorities to push for its withdrawal. It is reported that the farm was also the source of foot-and-mouth disease on two other occasions since 2011.

An official from the Association of Village Foremen of Jincheon County said, “After finishing the quarantine of the disease, we will ask the farm to pay for a part of the expenses such as running a control tower and other costs caused by the disease.”