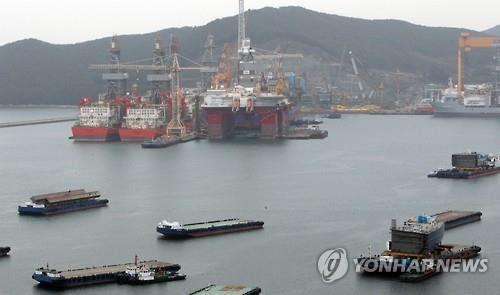 SEOUL, May 2 (Korea Bizwire) — Loss-making South Korean shipyards, facing growing pressure from their creditors to cut costs amid an industrywide slump, are expected to ratchet up moves to cut their workforces and sell noncore assets, industry sources said Monday.

Last month, the government picked five sectors to put under intensive restructuring as their bad performance has been a drag on Asia’s fourth-largest economy.

“Local shipyards are expected to roll out additional self-rescue measures this month to tide over the worst slump in history,” a source said.

In particular, creditors of Daewoo Shipbuilding & Marine Engineering Co., led by the state-run Korea Development Bank, are pressing the beleaguered shipbuilder to devise additional restructuring moves, including cutting its workforce, and selling wages and assets.

The shipyard is also seeking to sell its headquarters building and other real estate.

Hyundai Heavy and Samsung Heavy, Daewoo Shipbuilding’s local rivals, are expected to eliminate up to 1,000 workers each through voluntary retirement plans or attrition.

Last week, Hyundai Heavy said it will cut the number of executive level officials at its affiliates by 25 percent during the first half, meaning that about 60 executives will be let go under the upcoming downsizing.

“In the face of the worst order shortage ever, we showed our strong will to do our best to survive by slashing the number of directors significantly,” a Hyundai Heavy official said.

The shipbuilding industry, once regarded as a backbone of the country’s economic growth and job creation, has been reeling from mounting losses caused by an industrywide slump and increased costs.

The big three shipyards racked up a combined loss of 7.7 trillion won (US$6.7 billion) last year. It was the first time that all three of the nation’s largest industry players registered losses.

According to the data by global researcher Clarkson Research Services, South Korean shipbuilders had an order backlog totaling 27.59 million compensated gross tons (CGTs) as of end-March, the lowest since March 2004.