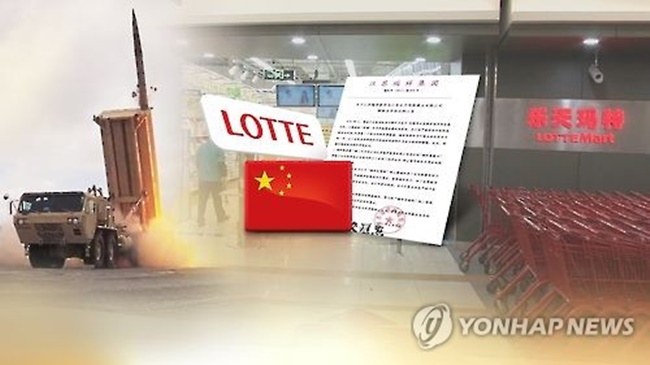 According to the sources, Lotte has named Goldman Sachs as the lead manager to sell its Lotte Mart stores in China. (Image: Yonhap)

BEIJING/SEOUL, Sept. 14 (Korea Bizwire) – Lotte Group has begun work to sell its discount store chain in China, company officials and an industry source said Thursday, as China steps up its retaliation against the South Korean retail giant due to its support for an advanced U.S. missile defense system.

According to the sources, Lotte has named Goldman Sachs as the lead manager to sell its Lotte Mart stores in China.

Depending on the results of negotiations with a potential buyer, Lotte could sell all of its discount stores in China, the sources said.

An official at Lotte Group confirmed that it has been in talks with the lead manager to sell all of its discount stores in China.

About 80 percent of the 112 Lotte Mart stores in China have been closed for more than six months since Chinese authorities tightened safety and sanitary inspections. These more rigorous inspections were in response to Lotte’s agreement with the South Korean government in March to a land-swap deal to host the U.S. Terminal High Altitude Area Defense (THAAD) system in South Korea.

Despite repeated assurances from Seoul and Washington that the THAAD system is designed only to defend against North Korea, China has long voiced opposition to the deployment of THAAD in South Korea, arguing that it is a threat to its security interests.

Hit by store closures and a boycott campaign by China’s state-controlled media, Lotte Mart’s sales have plummeted, but it has still paid salaries to its Chinese employees.

Lotte Mart injected 360 billion won (US$318 million) of emergency funds into its Chinese retail business in March and recently decided to pour in an additional 340 billion won to sustain operations there.

If this trend continues, Lotte Mart estimates the loss will amount to 1 trillion won this year, company officials said.

E-Mart, South Korea’s No. 1 supermarket chain, which is run by Shinsegae, is also in the process of leaving the Chinese market after years of operating losses, which were expected to worsen following South Korea’s recent deployment of a U.S. missile defense system.

E-Mart first entered China in 1997 and at one point operated 30 stores, but tepid sales have led it to reduce its stores to just six. E-Mart logged operating losses of over 150 billion won from 2013 to 2016.

According to company officials, talks have been underway with Thai conglomerate Charoen Pokphand Group, which runs other supermarket chains in China, to sell them the stores.

Along with Lotte and E-Mart, many other South Korean firms have been struggling with China’s retaliatory measures.