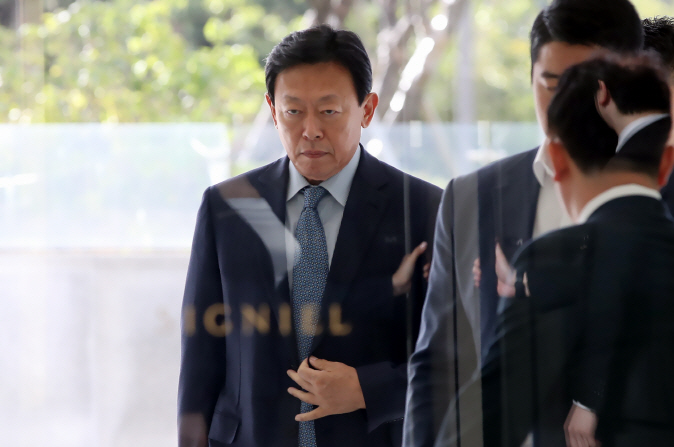 Lotte Group Chairman Shin Dong-bin arrives for work at Lotte World Tower in southeastern Seoul on Oct. 8, 2018. He was freed from prison on Oct. 5 after an appellate court suspended his sentence on bribery charges. (image: Yonhap)

SEOUL, Oct. 8 (Korea Bizwire) — The head of South Korea’s fifth-largest conglomerate, Lotte, returned to work on Monday after an appeals court suspended his sentence on bribery charges, releasing him from prison.

Lotte Group Chairman Shin Dong-bin was briefed by Vice Chairman Hwang Kag-gyu and other executives during a weekly meeting over pending issues in the chemicals, food, hotel and retail businesses, according to Lotte officials.

“Even in difficult situations, we should not be intimidated, but rather actively carry out investments and contribute to the national economy,” the chairman was quoted by a Lotte sources as saying.

On Friday, the Seoul High Court sentenced Shin to two and a half years in prison, suspended for four years. He had been in a detention center since February for involvement in a corruption scandal that led to the ouster of former President Park Geun-hye last year.

Shin was convicted of giving 7 billion won (US$6.2 million) in bribes to a nonprofit foundation controlled by Choi Soon-sil, Park’s old friend who was at the heart of the scandal. Choi is currently in prison.

Following the appellate court’s decision, Lotte said in a statement that the business group will work on issues that could not move forward due to the leader’s absence, and vowed to contribute to the country’s economy.

In October 2016, Shin unveiled a set of reform measures, including a plan to invest 40 trillion won and hire 70,000 new employees over the next five years, following the prosecution’s separate investigation into the conglomerate’s corporate crime allegations.

The plan has been largely stalled following the group chief’s incarceration.