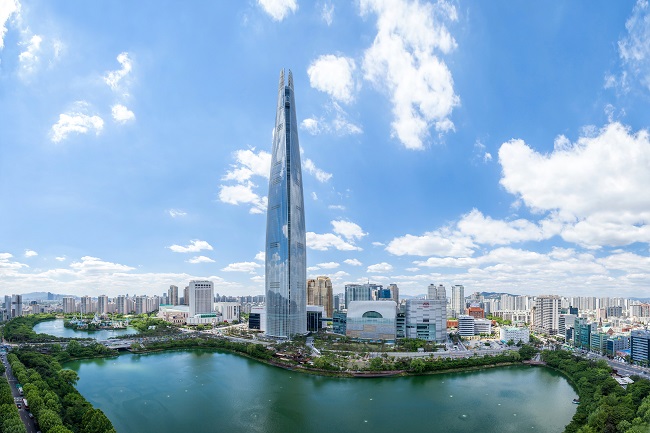 This photo, provided by Lotte Corp. on May 24, 2022, shows Lotte World Tower, the 123-story skyscraper and the tallest building in South Korea, located in Seoul’s eastern district of Songpa.

SEOUL, May 24 (Korea Bizwire) — South Korean retail giant Lotte Group said Tuesday it will invest 37 trillion won (US$29.2 billion) over the next five years to expand its businesses to bio and mobility, and further bolster its key chemicals and retail sectors.

Lotte plans to spend 41 percent of the earmarked investment in biopharmaceuticals, electric vehicle charging infrastructure and urban air mobility, the company said in a release.

It is looking to spend about 1 trillion won to build a factory for its drug outsourcing business, known as the contract development and manufacturing organization (CDMO).

For its mobility business, it will take part in domestic UAM infrastructure projects and increase the EV portion by about 240,000 vehicles for its car rental business, it said.

It plans to spend more than 1.6 trillion won for hydrogen and battery materials businesses, and 1 trillion won in plastic recycling and bioplastics, aiming for a production capacity of 1 million tons for recycled products by 2030.

A total of 7.8 trillion won will be spent to boost facility and production in advanced industrial materials.

Lotte will spend 8.1 trillion won in its flagship retail business, pushing to build a large-scale shopping complex in Seoul’s western district or the Songdo area in Incheon, west of Seoul. It is also planning renovations for its existing department stores in Seoul.

Lotte said it will also spend 2.3 trillion won in hotel and duty free to attract foreign tourists as it pushes to revive the key businesses amid an easing of COVID-19 border restrictions worldwide.